China correctly shows the rest of the world how to deal with "Evil Drug Dealers and Traffickers ! " 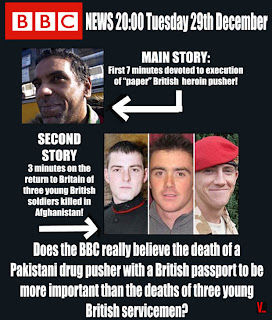 The Chinese government has shown the world how to deal with drug pushers by ignoring liberal bleating and executing convicted drug-smuggler Akmal Shaikh — a punishment which should be mandatory everywhere for that crime.
Mr Shaikh, who the media quite falsely claim to be a “British” man, was born in Pakistan in 1956. He moved to Britain in the 1960s and when he married a Hindu Indian, he insisted she convert to Islam before the marriage could take place.
Mr Shaikh and his family then lived in America during the 1980s (astonishing how Pakistani nationals appear to be able to glibly move between First World countries with no apparent immigration problems) but moved back to Britain when his estate agency went into bankruptcy.
He then started a minicab business in London but this also went insolvent.

Mr Shaikh was accused of sexual harassment by a former employee at the company, although it is unknown if this contributed to the insolvency.
He then divorced and moved to Poland, where he was resident before travelling to China to allegedly perform at a nightclub in Kyrgyzstan.

He was however arrested at Ürümqi Airport in September 2007 after a baggage search revealed he was carrying four kilograms (9 lb) of heroin. The Chinese criminal code provides the death penalty for smuggling heroin in quantities more than 50 grams (2 oz) and he was sentenced to death.
In his reaction, British Prime Minister Gordon Brown said he was “appalled” by Mr Shaikh’s execution — a position which contrasts strongly with his lack of empathy for the hundreds of British lives lost as a result of his and the Tory-supported illegal and immoral wars in Iraq and Afghanistan.
In those wars, British servicemen and women have been murdered in the most horrendous ways: by being blown up, shot at with sniper rifles, killed by roadside bombs and in rare occasions, even tortured to death by Islamist fighters, some of whom come from Britain.
Mr Brown and the liberal elite seem more concerned however, about one drug-smuggling Pakistani in China then they do about the hundreds of British soldiers they have sent to die in their dirty wars, or even of the tens of thousands of British pensioners who have already died this winter because they are unable to pay their privatised and dramatically increased heating bills.
Once again, the Tory-Labour-Lib-Dem alliance and their media-cronies have demonstrated their total disregard for the interests of the indigenous population of Britain by placing more value on the life of a Third World criminal than on their own people.

The wheels of justice grind slowly, but grind they will, and one day this liberal elite will be called to account for their crimes against the British people.
Related link http://www.thisissouthwales.co.uk/news/hang-evil-drug-dealers-live-television-BNP-member/article-1342054-detail/article.html
Kevin
Posted by Kevin Edwards at 23:38:00

How easy it is to say "i'm british" no the press say he is british, he became british by applying for a british passport and any tom, dick and criminal from any country can become british that is an insult to the dead that fought for this country and i'm sorry this country has sold itself down the river to multicultural madness. sad times ahead look at conservatives even sadder times to come :(

If a dog is born in a stable it does not make it a horse.

Looks like this guy did not spend much time here but used his British Passport to travel the world.

Stinks in my opinion

The Zionist owned and controlled Media, will no doubt portray him as not only innocent, but British. Whereas, we know that he was neither.
He probably believed that the Chinese Government were no different from our bought and paid for Commie whores and that he could ignore their laws with equal impunity. Wrong!
So even though he may have been worthless as a whole, many of his parts are now helping some worthy Chinese.

He knew what he was doing.He got caught. He knew the risks profit or penalty.

Why is our Government even bothering with this ?