How Dangerous Is This ? Belong to Groups the State Don’t Like? They’ll Take Your Children Away.

How many Muslim ‘extremists’ have their children taken into care for having “inappropriate” friendships, or for holding views which don’t tally with those of the liberal, multicultural state?Abu Qatada certainly didn’t, his family got a nice council house.  One bets none of the poppy burners, preachers of Sharia for UK, or those declaring ‘gay free zones’, have had their kids taken away either.But Toni McLeod faces losing custody of her children - simply because she was formerly involved with the English Defence League, and now has some alleged involvement with the North West Infidels.Mrs McLeod, who is 35 weeks pregnant, and whose husband Martyn is a soldier who has served in Afghanistan, faces having the baby taken from her by social workers the moment it is born.
.
Durham County Council informed her last month that her unborn child was being placed on the Child Protection Register.  Before that, a judge had already ruled that her other three children should be permanently removed from her care.

“Toni clearly needs to break away from the inappropriate friendships she has through either the EDL or break-off group in order that she can model and display appropriate positive relationships to the baby as he/she grows and develops” said a social worker report, “Toni has been a prominent member of the EDL.  They claim they are a peaceful group, however, they have strong associations with violence and racism.”

One bets a social worker wouldn’t dare to write that about any parent who belonged to many of the Muslim groups which blight this country - and if they did they’d probably be out of a job right after on some trumped up racism charge.

Liberal Democrat MP John Hemming has raised the case in the Commons, contrasting the treatment that Mrs McLeod has received with that of Muslim fanatic Abu Qatada.

“This case is one where the ‘thought police’ have decided to remove her baby at birth because of what she might say to the baby.  I wonder what the baby’s father is thinking when he fights for a country which won’t allow him to have a child because of what the child’s mother might say” said Hemming, chair of the Justice for Families campaign group.

Qatada, currently fighting deportation, never seemed to have any trouble keeping hold of his children.  They even got moved to a bigger house before his re-arrest earlier this year.  It must be okay when Muslims do something considered as ‘extreme’ by officialdom, but not when non-muslims do it.

That line from the social worker though, “Toni clearly needs to break away from the inappropriate friendships she has through either the EDL or break-off group in order that she can model and display appropriate positive relationships to the baby as he/she grows and develops.”

Is that an open threat from social workers to everyone out there - if you belong (or have belonged) to certain organisations, if you don’t embrace the multicultural nightmare and won’t teach your children the joys of ethnic minorities and mass colonisation, you’ll get your kids taken off you?

Has the state now decided that a parents ideology is cause for tearing a child away from a loving family, that a child is now a weapon to be used in order to stifle dissent?

It raises a terrifying spectre of children abducted and taken into care because of their parents political beliefs.  That’s more like some hardline Communist state than any kind of Western democracy.

Toe the line or lose your children.  The thought police are running the show.  Not only may they come for us if we dare to speak out about what is happening in our nation today, they could well be coming for our children as well.

Welcome to dictatorship Britain, where you are free to believe what you like so long as it is in accordance with the official doctrines of the glorious multicultural revolution.
.
It’s off to the gulag for you, and re-education in state care for your kids, if you dare to behave or speak in any other way.

A lot of anger being expressed.

Elections in the British One Party State.

Do you know the truth about the EU?
If you vote Conservative, Labour, Lib-Dem, UKIP or the BNP, you'll be voting for the EU dictatorship.

All five party leaderships are EU controlled. That's why your vote doesn't make a difference - all these five parties have the same policies: the EU's policies.
The 17 most senior politicians in the Conservative, Lib Dem and Labour parties, including Ken Clarke, Francis Maude, Cameron, William Hague, George Osborne, Nick Clegg, Brown, David and Ed Milliband, Ed Balls, Peter Mandleson are Bilderbergers, the 140 strong band of ultra senior Freemasons who are bribed by the EU to build the EU dictatorship.

No Bilderberger, Freemason or Common Purpose Graduate should ever be allowed to hold public office. 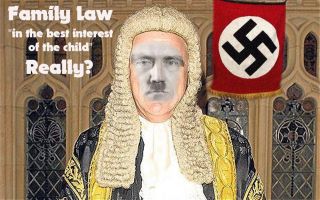 In modern language usage, brought about by use within the Courts, the word “care“,  has become synonymous with the word “custody“.
A family is a group. The taking of children and moving them from one group to another is prohibited by UK and International Law, this is evidenced by the provision in UK Statute Law -
“International Criminal Court Act 2001 – Schedule 8 – Article 6 – Genocide (e) forcible transferring children of the group to another group”
There is a forthcoming prosecution against Leeds City Council, due to evidence becoming available of the Body Corporate acting outside of any Lawful Jurisdiction, in its aim of creating a financial gain for itself, by creating a loss elsewhere, this is recognised and protected from in Law via the Fraud Act 2006.
Leeds City Council Corporate Body contains departments within.  Individual departments receive money, some for the custody of children.
If Leeds City Council departments do not spend their full budget within each financial term, they may not be eligible for a full budget the following term, if they do spend their budget, or go over budget they may become eligible for a full or increased budget the following term.
This is a target driven by money.
We intend to clearly show, using more than one example of children being removed from families, that the process  Leeds City Council have used in certain circumstances has been for their own gain, and outside of any accepted Lawful process.
Leeds City Council have been hiring the use of Circuit Judges and District Judges to sit in what looks like a Court environment, but is in effect only a room with an arbitrator, deceiving desperate parents in an attempt to take their children from them in order to fulfill their quotas.
What Leeds City Council has been doing, has nothing to do with Lawful process, or safety.
Notices of fault have been issued along with Notices of intended prosecution to relevant parties.
What we are doing is historic, and is in the Wider Public Interest, to uphold the Law.
We are all equal in Law.
Find out more information here;
http://thejarvisfamily.me
For further information please contact;
chris@thejarvisfamily.me
Posted by Kevin Edwards at 17:26:00 2 comments:

They Don't Want The Truth Coming Out. When It Does Their Heads Will Roll.

This frightening video needs to be listened to in it's entirety.


Those of you interested in what has happened specifically  to Linda Lewis and her daughter N@t@sh@.Brian starts to speak about this case after about 37 minutes and 40 seconds for a total of about four minutes.
Posted by Kevin Edwards at 13:53:00 3 comments:
Newer Posts Older Posts Home
Subscribe to: Posts (Atom)