While 1.8 million families remain on the Housing Waiting List a former asylum seeker lives in a £1.5 million home at our expense ! 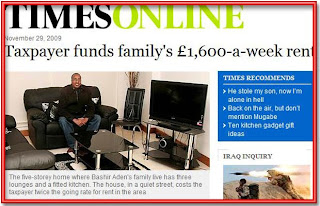 After almost a year since it was revealed that Toorpakai Saeidi, an Afghan immigrant mother of seven was living in a £1.2 million mansion and claiming £175,000 in benefits every year, the news has come that a Somali, Nasra Warsame and seven of her children are living in a luxurious £1.5 million home — also courtesy of the British taxpayer.

All this costs you the British taxpayer £1600 a week.

Even though the home has six bedrooms, it still isn’t enough. Ms Warsame’s husband and eighth child live in a separate 2 bedroom apartment, also in London.

Meanwhile in the same week mother of two, Stephanie Lewnes her seven-year-old son Cameron and five-month-old daughter Lilly, were quite surprised when Dudley council finally handed keys to her new council home – only to be greeted by live wires hanging from the roof, boarded up windows with glass and piles of rubbish in the garden.

The contrast between these two stories shows just how much regard the liberal elite have for young British mothers like Stephanie Lewnes compared to Somalian families like the Warsames.

This comparison only proves that immigrants are indeed given priority on the housing waiting list.

British families find themselves put to the back of the housing list, simply because immigrants are fast tracked because they often have large families and are therefore given priority.

With projections that the population will grow by 9,3 million in the next 30 years to over 70 million, it’s highly unlikely that smaller British families will be getting council homes any time soon.

However, when faced with these figures it’s reassuring to know that the Home Secretary Alan Johnson stated in June, “I do not lay awake at night worrying about the population of 70 million. I’m happy to live in a multicultural society” — reassuring words from a man who at one time considered himself a Marxist and aligned with the extremist Communist Party of Great Britain.

Why should British families suffer at the hands of a corrupt government as a result of the failed multicultural social experiment?

The stark reality that foreigners who contribute nothing to the country and who end up in homes worth millions of pounds, will serve as a real blow to the white working class who have been betrayed, forgotten about and ignored by a corrupt party which promised twelve years ago to represent.

Personally I have never seen a Homeless Immigrant or Illegal Immigrant but I have seen plenty of our own people sleeping rough on the streets.

Spot on. My son is engaged and has no chance of getting a Council House.