People need to stop hoping for Cameron or Brown to change their politics. 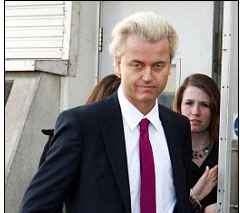 Geert Wilders arrives in Britain today to show his Fitna movie to MP's and Lords.
.
Wilders party scored major gains in Dutch elections and he could be set to take the role of Prime Minister in the June elections, which clearly demonstrates how much of a pain the current criminal politicians have caused with their pathetic multicultural program and their preparedness to put the indigenous peoples of Europe last when it comes to democracy, rights or freedom.
People need to stop hoping for Cameron or Brown to change their politics.
The fact is, they simply don't have the principles or the commitment to this country which would propel them or anyone else into power with the majority of people behind either of them as long as they believed they were acting in the country's interest rather than their own.
They all have a passion for globalism, multiculturalism, global economics and anything to smash Britain and its people.
.
All they ever talk about are 'others' and the majority of people are on to them hopefully just as they are in Holland.
America is the same with the Tea Party Convention and a rise of 244% in patriotism there, which is showing just like Holland, that people are ready to take power back to the people and will remove the political shambles made by non-representative and placed professionals who have ignored them for too long.
.
ENOUGH!
.
BNP for the British people.
.
End of Story!
Posted by Kevin Edwards at 17:09:00