NOT PAINFUL?: Halal slaughter on a street in Pakistan. Now it has come to a primary school in Blackburn. 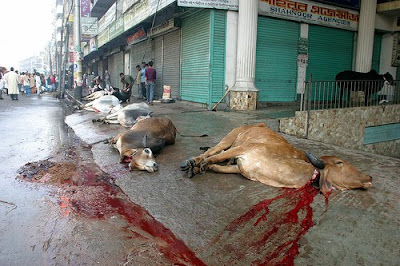 A SCHOOL in Blackburn has become the first state school in Britain to receive accreditation for serving Halal food.
.
Daisyfield Primary is the first non-Muslim school to get the certificate from the Halal Monitoring Committee which enforces strict checks on the killing, preparation, packaging and delivery of animals.
.
Halal is the ritual method of slaughter practised under Islam and it has been criticised by animal welfare organisations who claim it causes severe suffering to the animals as they are left to bleed to death without pre-stunning.
.
While campaigners point out that a cow will take up to two minutes to bleed to death under Halal, the Muslim Council of Britain argues that it provides a quick haemorrhage with no time for the animal to feel pain.
.
This claim has angered the Farm Animal Welfare Council which published a report that concluded the way Halal meat is produced causes severe suffering to animals.
.
It responded “This is a major incision into the animal and to say that it doesn’t suffer is quite ridiculous.”
.
Daisyfield’s changeover to Halal has upset local residents.
.
One told the local newspaper that the move will force children to eat Halal meat, while another said it was further proof of the Islamification of Britain.
.
See also http://cllrkevinedwards.blogspot.com/2010/02/giant-halal-slaughterhouse-coming-to.html
.
Where a £150m, 100 acre ‘super halal industrial park’,is coming to South Wales.
.
They won't tell us where.
Posted by Kevin Edwards at 12:42:00

Rumours tell us Carmarthen and Cross Hands.
The Evening Post tell us it is going to be on the old Graig Merthyr Colliery site in PONTARDDULAIS.

WHAT HAS THE RSPCA GOT TO SAY ABOUT THIS.
Leaned on to turn a blind eye by Herr Hain the tango South African terrorist I would imagine.

The LibLabCon Zionist Lackeys, are turning our once great country, into a third world cesspit. It is not only our animals being tortured and slaughtered upon our streets.
So I sincerely hope that our people wake up soon and help us to put a stop to this madness, by getting off their backsides and voting BNP. Our ancestors gave their very lives to protect our homeland, so is this asking too much.
Because what is happening now, is just the beginning, it will get worse, much worse.
JMHO Allegedly!

A guy I work with has been told it it will be Llantrisant.

He is adamant on this.

It seems that diversionary tactics are being used by our " scum political elite" to keep us the ordinary people guessing and in fear of this monstrocity.

Expect an announcement of who will be the beneficiary of this further "Multi-cultural madness" AFTER the general election.

What part of South Wales as the politicians will tell us are the lucky winners ?