It is no wonder that Local Schools are being closed. 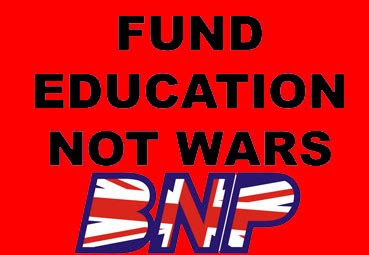 The Government has cut funding to British universities by £398 million while increasing spending on the Afghanistan conflict to £3 billion per year — a move which effectively denies British people educational opportunities in order to wage an illegal foreign war.
All across Britain, the effects of the decades of Tory and Labour underfunding of our educational system are starting to bite.
.
Rather than invest in British people, Gordon Brown last month announced ”the introduction of a wider choice of foreign internship schemes, making it easier for businesses in the UK to bring over the brightest and best graduates from around the globe, from spring 2010.”
In other words, ignore the British people; bring in more foreign workers.
.
And to make sure British people have no chance, cut the education budget at the same time in the name of “domestic expenditure cuts.”
Business secretary Lord Mandelson recently announces a cut in university funding in England of £398 million for 2010–11.
The Russell Group, which represents 20 universities in Britain, responded by warning: “It has taken more than 800 years to create one of the world’s greatest education systems, and it looks like it will take just six months to bring it to its knees.”
Meanwhile, Tories, Labour and now even the Lib-Dems have committed themselves to staying in Afghanistan and even intensifying the conflict there — despite the costs of that conflict rising to around £3 billion per year.
When that is added to the £8 billion foreign aid budget spend, it can be seen that the Government is spending over 20 times the education budget cuts on wars and foreign aid — nothing short of a national disgrace.
The Tories have an identical policy of increasing foreign aid and making “domestic budget cuts” so there is no succour to be found in that party.
Only the British National Party seeks to halt all foreign wars and foreign aid.
A BNP government will invest this money into the educational system so that British people are afforded the opportunity to acquire the skills necessary to keep this nation running.
It is time that the British people were put first.
Posted by Kevin Edwards at 11:46:00

The only way to prOperly educate out kids is to vote BNP.