Fears over a third of council jobs in Wales 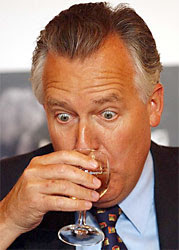 The Secretary Of State for Wales pictured enjoying the good life.
.
A warning has been sounded that almost one in three council jobs in Wales may be cut in the next few years.
With about one in four workers in Wales in the public sector, there are fears the financial crisis could hit harder.
One leading expert in local authority finance said the "worst case scenario" could lead to a reduction in jobs of between 15 - 30% as budgets fall.
The Welsh Local Government Association (WLGA) has described this as the most difficult financial period in 50 years.
BBC Wales has contacted all 22 Welsh county and borough councils.
Some, like Neath Port Talbot, said no compulsory redundancies were planned, but 750 posts will need to go over the next four years.

With 80% of local authority spend being on average workforce spend, then there's some inevitability that with a deficit of 25 - 30% you are going to have to look at your workforce
Lynn Hine, PriceWaterhouseCoopers
The WLGA has already forecast that 2,000 to 4,000 council jobs could go, with some over three to four years.
"We have done some analysis and we estimate that something in the range of 15 - 30% of workforce levels could be the worst case scenario."
In Wales, about a quarter of the workforce are in the public sector, which compares with about a fifth in England.
.
Full story http://news.bbc.co.uk/1/hi/wales/8542241.stm
.
There is plenty of money for illegal wars, MP's expenses and funding the "Multi-cultural experiment" and the foreign aid budget is to be increased from £8 billion to £14 billion but when it comes to local jobs and local services there is nothing !
.
Enjoy your champagne Peter while you can.
.
Kevin
Posted by Kevin Edwards at 17:52:00

You will never see a Manager loose his job.
Its always the working man at the bottom the ladder that gets the push.
How many phantom jobs are there in South Wales Councils.
How many walk our corridors of power with no specific roles or job descriptions.

Peter Hain is an abortion. A DISGUSTING LOWLIFE, A THIEF AND A TERRORIST.

He turns my stomach