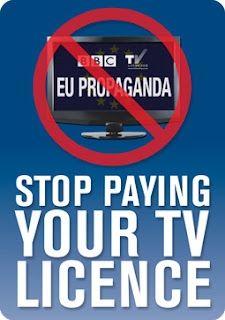 Basically if you are PAYING for a TV LICENSE from this PRIVATE COMPANY you are being DECEIVED and if you REFUSE to PAY they will use a STATEMENT (CONTRACT) so you can PUNISH yourself by your own ACTions. Without DECEIVING you into this, there is nothing they can do and this is quite EVIDENT by their own DOCUMENTATION. Pleas click the image above for more information.

Join this campaign today and let the Government know you will not tolerate their blatant use of our money to publish and broadcast their propaganda, lies and corruption.
Treason has been committed and is still being perpetrated on a daily basis, and you by paying this tax are allowing this to happen.
Join us at The Peoples United Community and say no to the TV Licence Fee and no to Treason!
John Harris - My lettter to the HM Attorney-General asking them to prosecute me for openly telling people to ( in their words ) break the law by telling them to not pay their Licence Fee
Please let us know if you are refusing to pay HERE, so we can compile a list of support of non- payment.
List of people who are refusing to pay and their comments.
Blatant abuse on a disabled gentleman by David Clark Capita/BBC Licence enforcement agent view video here.
Click here for more evidence of the BBC’s deceptions
Scroll down to read the full article, download letters and instructions needed.
THE EVIDENCE IS NOW PRESENTED TO SCOTLAND YARD FOR IMMEDIATE INVESTIGATION!
NOW THAT THE NEW INCREASE in the BBC Licence Fee has been approved by the Very Dodgy Dimwits of Westminster, it is now revealed that the BBC has been receiving tens of millions of pounds every year from the Sinister Dictators of Europe  - without the knowledge of the British Public!
DEPUTY ASSISTANT POLICE COMMISSIONER John Yates, Director of Intelligence at Scotland Yard has been asked to investigate the BBC’s sources and applications of money, excluding the Licence Fee, and  evidence linking the BBC to the European Dictators has been provided in support of the allegation that the BBC has ‘sold-out’ to Shady Politicians.


THUS FAR, THE INVESTIGATION into the Financial & Political Mischief that is clearly affecting the independence of the BBC has been conducted by Mr Ashley Mote, MEP, who is independent of all political parties and a keen supporter of British Independence from Europe.  It is the records of Mr Mote that have now been delivered to Scotland Yard for Urgent Police Action at Senior Levels.


THE BBC IS REGULATED by a Royal Charter which specifically requires the BBC to keep clear of all political bias of any kind, and the records of Mr Mote show that the BBC has received vast sums of money from agencies of the European Union in return for BBC support of this Union:  This Contract of Evil is contrary to both the Spirit & the Letter of the BBC Charter, which has the force of law.


ALL HONEST PEOPLE WILL WELCOME the news that Scotland Yard is now being required to investigate the finances of the BBC. We can report that the BBC has already commissioned an internal enquiry into the pro-EU Policy that has been running for years, and the very existence of this internal enquiry serves to confirm that something is badly wrong with the management and reporting operations of the BBC.


IT IS SIGNIFICANT THAT HUNDREDS OF PEOPLE are already refusing to pay for BBC Licences because of BBC bias, and where the accusation of bias – most properly described as Corruption - has been openly stated by the relevant members of the public, the Licensing Authority has declined to pursue the issue of Non-Payment!


NOW IS THE RIGHT TIME for All Licence-Holders to Stop Paying for A Corrupted Institution that has seen fit to Sell Itself to Sinister People?

THE WEIGHT OF PUBLIC OPINION must be brought to bear on the Criminals who have been manipulating the BBC and who may well be the causes of failure in all of the other public services that are now falling into the dust:  All Public Services, including the BBC, are the property of the British People – and it is for the British People to make sure that these services operate effectively & clean of corruption!

Do you want to stop paying now? Then follow these easy steps and stop paying for corruption, treason and the mismanagement of your money.

The first letter you need to send:

EACH PERSON TO KEEP A COPY OF THIS LETTER FOR THEIR OWN RECORDS (ATTACHED TO THE CERTIFICATE OF POSTING BY RECORDED DELIVERY)
Put Personal Name & Address here
Put Date Here.


It has been brought to my attention that the Corporation has received and is now receiving substantial amounts of funding from the European Union, in breach of Charter Provisions, and that in consequence of this very suspect arrangement the BBC is now reduced to the function of providing both broadcasting & propaganda facilities to a form of alien authority that fails to acknowledge the Supreme Authority of the British Crown.


In addition, I must advise that the Treason & Felony Act of 1848 provides that it is a Criminal Offence for Subjects of the Crown to give aid or comfort to Traitors, and that this offence is punishable by imprisonment for life.


I am concerned for my own position and I must ask you to cease and desist from all treacherous conduct & financial arrangements, without delay.


Unless I receive your written assurance that the Corporation will issue an immediate public apology for all Treason committed thus far, with your further guarantee that the Corporation will cease and desist from all and any conduct that fails to maintain the Supremacy of the British Crown, then I must give fair warning of my intention to discontinue the payment of all such moneys as are now being applied to the financial support of the BBC.


I look forward to receipt of your immediate response to this present letter and I give notice that payments in support of the BBC will be suspended, unless I receive a satisfactory response within 14 days of this present date.

The second letter you need to send: after none response


Your records will show that I have not received a satisfactory reply to my letter of the ???????, and I must now advise that I am no longer able to support the BBC.


As from today, all payments in respect of a television licence have been cancelled..

NOTE – A COPY OF THIS LETTER TO BE KEPT WITH THE COPY OF THE 1ST LETTER – READY FOR PRODUCTION WHEN AN OFFICER OF THE TELEVISION LICENSING AUTHORITY VISITS THE PROPERTY.

AT THE TIME OF ANY SUCH VISIT, ACTION TO BE TAKEN IN ACCORDANCE WITH THE GUIDELINES TO FOLLOW:
NOTES FOR GUIDANCE IN RE TV LICENCE
For Use/Application When/If you receive a personal visit from a representative of the TV Licensing Authority - AND NOT BEFORE –

(This part of the tape will serve to emphasise that YOU have no intention of running away from the fight – and that YOU are concerned to see the issues resolved!)


The issues are clearly very important to all concerned, and your visitor Must be assured of your utmost co-operation in making sure that these issues are properly and lawfully resolved.

Many people who have followed this procedure have not paid for their licence for many years, and have not been prosecuted for none payment – not even contacted by the BBC regarding future payment. In the very near future we will be publishing a list of people who have refused to pay, and continue to do so.

Firstly, we're not the official TV Licensing. We campaign against their torment of legitimate non-TV viewers.

Your article is well intended, I'm sure, but inviting TV Licensing into your home is a bad move - even more so if you're going to try and rub their nose in it by openly demonstrating you have a fully installed TV.

There are ways of avoiding payment of the fee. In our experience the best option is to remove communication. Simply ignore their letters, close the door on their people and hang up if they phone. By refusing to communicate with them you are not incriminating yourself, so they won't be able to gather any evidence of an offence.

Please do read our blog for further information.

thanks for the tip won't be paying

Don't think anyone should pay for BBC

excellent article everyone should stop paying their TV Licence.

I agree we should stop paying our Tv license.

The BBC is diseased with Common Purpose.