You don't have to be a "Second Class Citizen " in your own country.You can vote BNP. IT'S YOUR CHOICE ! 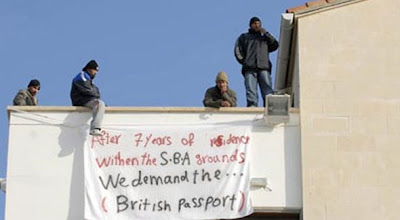 More than £230 million of British taxpayers’ money is spent every year housing the tidal wave of utterly fake asylum seekers, official Government figures have revealed.
There are no legal asylum seekers at all in Britain.
International asylum law states clearly that people have the right of refuge in the first safe country neighbouring the one they are fleeing.
There is therefore no excuse at all for people to cross 20 safe countries to get to Britain and then claim asylum.
A British National Party government would declare Britain closed to all such scrounging criminals and turn them back at the border without any exception.
Those already present would also be immediately deported without compensation.
They have broken the law and cannot be rewarded for doing so.
According to news reports, immigration officials have “authorised the use of public money on more than 25,000 council houses for claimants to live in while their applications to stay in Britain are processed.”
This figure has nearly doubled from £132 million three years ago, the reports claimed.
The outrage of allocating social housing to scrounging fake asylum seekers is made even worse by the fact that nearly two million British families are on the social housing waiting list.
The official figures showed that £584 million has been spent on council and other social housing for asylum seekers over the past three years. This translated to 16,550 homes in the 2007–08 year alone. The next year this figure had risen to 19,050 houses.
* According to a Freedom of Information Act request submitted to Middlesbrough Council by local BNP activists, “asylum seekers” in Cleveland get £40 per week for gas and electricity and another £35 per week per person towards food, clothing and toiletries. Failed asylum seekers don’t get money to pay for food but they do get vouchers worth £35 per week.
This means that a family of four gets £140 for food and another £40 for gas and electricity, a total of £180 per week. In one year a family of four will get £9360 in direct benefits.
This is more than many British families spend on household bills.
Also NHS treatment will be available for tens of thousands of failed asylum seekers to ensure their human rights are honoured, it has been announced.
There are understood to be around 450,000 failed asylum seekers who have not left Britain.
British Jobs for British Workers.
British Homes for British People.
Vote BNP
Kevin
Posted by Kevin Edwards at 18:49:00

Our country is in decline and is being swamped.

My mum and I have had a chat and we think by chatting to doctors and nurse last year that we are going to lose my dad’s Alzheimer’s medication entitlement, we could tell by the doctors remarks in the meetings, that my dad does not fit in the criteria bracket and the medication will go to someone else, what can I tell my dad that we don’t have any medication now and your health/brain will cease to function from here on in, and our lives will be taken over by such a cruel waste of life that my dad worked and paid taxes all his life and he won’t get what he deserves. How can I tell people what we are going through and what is coming up this year, I have read that asylum seekers get £40 per week for gas and electricity and another £35 per week per person towards food, clothing and toiletries. Failed asylum seekers don’t get money to pay for food but they do get vouchers worth £35 per week. How can this be a fair an honest country when my family are going to suffer. I am sad to say that being British, there is little to no support for this country and everyone wants to give money away to other countries while us British people like the elderly with no money to keep warm, flooding victims and all families with ill family members are suffering. Should I just survive?, when people enter this country get everything free. It can’t be right that we who are suffering just survive