New Labour is run by vicious, evil people hellbent on silencing the real voice of the British people - The BNP 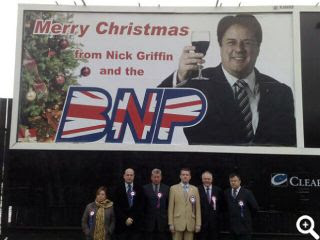 One of the bill boards that was later vandalised by Labour supporters.
I found it a little bit strange when Young Labour voted in Sam Tarry, a middle aged man with bleached blonde hair and an hairline that is receding faster than Labour voters are vanishing, as their National Chair. But then again Labour Politicians have always had an interest in young people.
Some might say too much of an interest to be healthy but at the end of the day it is their business who they elect to help lead them to defeat.
However, when the Leader of the Young Labour Movement publicly condones graffiti and vandalism attacks against property, as seen by the comments below, then that makes it all our business.
"Pleased to see both the massive Barnbrook and Griffin BNP Christmas greetings billboards on the A13 in Barking have been torn down/defaced!Sadly nothing quite on the Banksy level which I was hoping for- black paint lobbed over and the other ripped half off."
Tarry like many members of New Labour is a nasty piece of work and is the communist run Searchlight Organiser for Dagenham, who firmly believes that the British National Party be denied a platform and now by making the above statements over on his Twitter site, he shows his contempt for not just the democratic process but private property also.
One wonders if these attacks are now "official" Labour Policy or are they "unofficially" supported, like the physical attacks on BNP supporters, members and activists by the communists of Searchlight and the UAF Claw Hammer Gang?
The other thing about Tarry is that he talks the talk but does not walk the walk.
One of his campaign promises was to make a more dynamic Young Labour website and in true Labour fashion, this is already a broken promise.
The site is still pushing events for April 2009.
Well done Sam, start the way you mean to go on?
And talking of sites that have not been updated in a while.
What has happened to the Searchlight run, Stop The BNP?
They appear to have stopped trying to stop the BNP and come to a stop themselves. They also appear to be stuck in 2009.
Pathetic.
They cannot run websites let alone a country.
Posted by Kevin Edwards at 18:11:00