It is sick world we live in, where a young woman, driven to despair by living in an enriched area that has seen violent rioting and the only faces she sees are usually those of the colonisers, is refused bail on the spurious grounds of her "protection", whilst a couple who have been accused of raping a one month old child are released on bail.
Then again, Emma West did commit the vile crime of telling the truth and must be jailed and her children stolen from her whilst the couple who "allegedly" raped and battered a one month old baby have been released on bail on what the state no doubt considers a less serious charge.

It is believed the boy suffered a broken arm, collar bone, punctured lungs and fractures to every rib.

There were also a sexual injury and serious internal injuries suggesting rape, according to the Sun.

The baby boy currently battling to stay alive with the help of a life support machine.

By all accounts, the injuries on the baby were the worse that the doctors and the police involved in the case have ever seen but then again it was not a "racial" attack so I guess bail is fine in this sick world where we are ruled by madmen.
"Remanded in custody" a pleasant way of saying locked up. 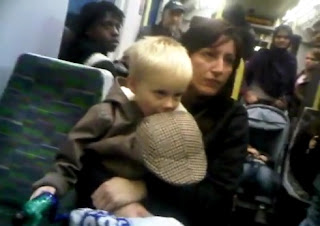 Two child deprived of their mother and now in the hands of Social Services because their mother spoke the truth and said what many dare not say but actually think.
Emma West has been referred for “psychiatric” tests while being detained without bail.Two sickos who rape and physically abuse a 1 month old baby boy to the edge of it's life are free to walk the streets.


This raises the following question.


Who exactly are the mad people in Britain ?


Those who have caused the multiracial disaster without the authority, or consent of the British people or its victims?
I wonder how many of you read those horrifying comments left on YouTube and elsewhere, and I refer to the comments condemning and threatening Emma
Some of those comments were unspeakable.
I would not repeat them or describe the content of them, except to say that some of them contained threats of unnatural acts toward her child, her toddler son, and this in the most obscene language possible
Yet the really repellent comments like that are perfectly acceptable at YouTube.
.
This, friends, is the face of perverted politically correct, forced multi-cultural Britain today.


They defend and champion the most unnatural, immoral, gross, and inhuman words and actions possible, while vilifying someone who simply said 'you ain't English' and 'you don't belong here.


Yes, Emma used some four-letter words, but those words are now heard everywhere in our popular entertainment, in our public squares, in our 'literature', and these words are uttered by 'ladies', old folks, and children nowadays.


Corrupt politicians and practisers of Common Purpose have worked mightily to make the formerly obscene words 'respectable,' and to remove all censure against those who used them publicly.

Of course they have.You in your apathy have let them.


But think about this: we now live in a world in which one can write or utter truly vile and shocking things, threats toward an innocent child and his mother, and face not even social disapproval -- yet a woman who speaks obvious truth ('you ain't English') is ''vile'' and deserving of losing her freedom and the custody of her own children.
Think about it.


These are measures instigated by "out and out madmen."
Perverted threats, the foulest and most insulting language is just fine -- but if you breathe one word against the 'protected victim groups' then you are 'vile' and a racist as well.
This is the measure of the political lunatics running our country from ALL the main political parties.

Perverted threats, the foulest and most deserving of death and worse.
This state of things is unconscionable, and it should make us stop and think, again, of how upside-down things have become.
Evil truly is 'good' these days.
How much more depraved can it be before some of the dull-witted and will fully blind among us realise how bad things are?
As if ''niceness'' will ever get us anywhere -- has it, so far? Has it impressed our corrupt and rotten politicians one bit ?

Some of you need to grow some balls and realise exactly what is happening in this country.

The day of reckoning comes closer for
THESE EVIL BASTARDS THAT MISRULE US.
I for one, look forward to that day.

If it is "true" that a one month old baby was raped.The "abuser's" should spend the rest of their life in Prison.

Is no one safe in this lawless society anymore.

Any Person or Person's that abuse Children should be in Jail for Life.

Regarding One Month Old Baby

In todays Paper the police strongly warn people against jumping to early conclusions,the police also state the investigation is at an early stage.

If the person/persons arrested have abused this baby then I think hanging would be to good for them.