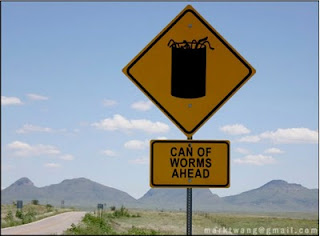 The Welsh Liberal Democrat Assembly Member for South Wales West, Peter Black, has called on the Deputy Minister for Social Services, Gwenda Thomas to closely monitor children's services in Neath Port Talbot following the publication of a highly critical inspection report.
Although the Care and Social Services Inspectorate Wales said that there had been improvements in the Council's children and young people's service, they identified a number of factors which they said 'impact on the authority's ability to provide a safe, high quality responsive service.'
These factors include the loss of experienced practitioners, a continuing high turnover of staff, the reliance on agency staff, high case loads for social workers, an increase in the volume and complexity of referrals, and inconsistent case recording.
The inspectorate concluded: 'Taken together these factors pose a significant risk in respect of ensuring the welfare and safety of children in the authority.'
Mr Black said: "I am very concerned about this report and the picture it paints of the way that Neath Port Talbot Children's Services operates. I have dealt with a constituent recently, whose experience of working with Neath Port Talbot's Childrens' Services raised many questions about how that section operates, its processes and the way that they manage risk.
In fact I was so concerned that I met with the Deputy Minister to ask her to intervene. I know too that there have been a number of serious case reviews that also ask serious questions of the department.
"I will now be seeking assurances that there will be much closer monitoring of the weaknesses identified by this report and that a further inspection is held within the next 12 months so as to confirm improvements are continuing to be made.
The Welsh Government must not rule out a direct intervention if things do not improve."
Source http://aberavonneathlibdems.blogspot.com/
END.
This really does open a "Can of Worms" for the reluctant and cowardly Councillor's Keith Davies and Frank Little the two Liberal Democrat representatives on Neath Port Talbot Council.
It also brings the whole of the Welsh Assembly into the spotlight all of whom know about this dreadful cover up and the abuse that Neath Port Talbot Council Social Services have inflicted on Linda,her daughter and her family.
Below is a letter sent to Linda from Peter Black AM 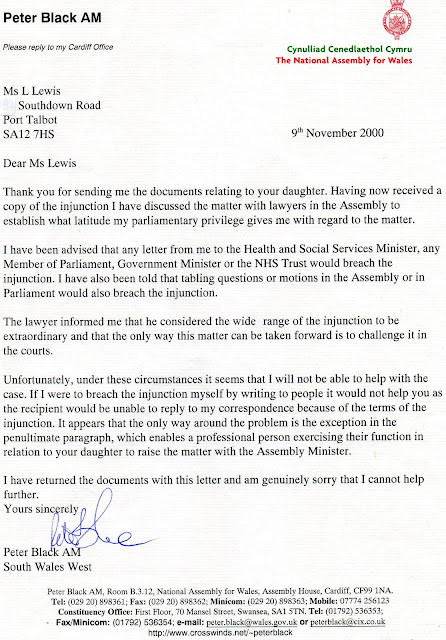 In the letter Mr Black constantly states that he is unable to take the matter any further due to the terms of the injunction.
Well Mr Black I have some good news for you under"Public Interest Law" and other laws I have at the risk of a "penal sentence" to myself broken this " false, fabricated and illegal " injunction so you have nothing to worry about when raising this matter in the near future.
As you and your fellow Assembly Members know "No injunction can ever be taken out to cover up for criminal acts."
You are all aware of this.


You all received the press release regarding the perjury that the former Welsh Inspector of Social Services Mr David Johnston committed by entering " false and fraudulent " evidence into an illegal court.


There is even more damning evidence regarding the illegal actions of Mr David Johnston that will soon be published by a member of the team in the near future.


We look forward to meeting you along with members of the Lewis family in the New Year so that this injustice can finally be exposed for the despicable,heartless crime that it really is.

RICHIE NOT SO RICH! said...

on the way back from swansea at 8:30 am this morning, an announcement over "BAYRADIO" neath port talbot children services under investigation and further investigations to follow,
NOW is the time to flood local councilors and mp's to aluminate this
damming council.
its time for heads to roll.
im sure if everyone pulled together to fund this... why not put a rolling trailer with very large headlines of this councils
"under the cloak" actions.
some have obviously benefited from keeping the doors shut!
SCUMM...
makes me puke just thinking about them!
richie

well well, what a shambles.
simply unbeleivable.
i hered this on the radio today.
would like to see the outcme a bit quicker than a year though.
surely this needs to be as a national intrest and brought up in parliment very quickly.
i have never liked what goes on up that council. to many shirtlifters i say. have you seen them going to that little coutch between the optitions and the old church in forge road?
shirt lifters mmmm i say!
quick hand shake and mums the word.

SPINE CHILLIN
ABOUT TIME FOR THAT PLACE TO BE OVER TURNED AND WATCH THE WORMS COME OUT.

I have just left a comment on the cowardly Councillor's site telling Little and Davies to grow some balls.

How surprising that the Evening Post makes no mention of Peter Blacks statement.

Protecting the guilty again I think.

Frank Little and Keith Davies "hand wringing and gnashing their teeth" over the fact that you had the guts to break it.

What a sorry bunch

What did Peter Black do about swansea social services in 2004/2005 when they were in a shambles - he was on the scrutiny committee.

This looks like early electioneering on his part rather than a genuine attack on poor public services.

What is stopping him from now speaking out about this case or any other case and exposing poor public services in Wales. Had he dealt with this case properly in 2000 then NPT services might be better today. Same symptoms, same problems, same supervisory bodies, same politicians - time for proper change and vote them out.

Does anyone think there will be any improvement by more inspections and monitoring by systems and people who have covered up before?

This could be Mr Black flying a kite - the assembly has plans to merge social services across councils - NPT and Swansea then get together save money and pretence of improving services.

Gwenda Thomas was previously at NPT as a councillor?

Lib Dems in charge of swansea Labour in charge of NPT! Until some gritty non establishment parties/AM's get elected to disrupt these cosy cronies things will not get better.

Always look behnd the headline as there could be an ulterior.

Peter Black should be ashamed off himself, he is just like all the other cowards hideing behind the injunction.||At least you councillor Edwards have brought this case to light,

you are a credit to Britain First we need people like yourself to fight injustices, the people of this Country should put their efforts into supporting Britain First.I am amazed No-one in government seems to be helping the Family when they are in a position to, do so,wishing you and your Family a merry Christmas and exposing injustices in the new year Happy new Year

You are Top Man
Sorry about the typing I have had a Christmas Drink.

Why don't Peter Black raise this Case in the Welsh Assembly.

Are you going to look at Swansea SS also Peter Black. I believe that some child kidnapping cases has been brought to your attention recently.
This included a baby being abused in care.
Is it not true that Swansea and Neath Port Talbot SS have joined in a dangerous combined force of "Billy Joel" followers in Alexandra House, Swansea.
Perhaps Peter Black will endeavour to reply, and enlighten us where all the missing children are. Luciferian sacrifices perhaps????

The documents Peter Black returned to Linda wouldn't happen to be the same documents that you have published proving the guilt of the establishment would they ?

he has been a waste of taxpayers money.

This latest news re Childrens Social Services is classic. There is a very fine line between incompetence and corruption. The excuse being given is 'Damned if they do and damned if they don't' but it is the same warped ideas of child care and lack of accountability that wrongly takes children away or leaves them with abusive carers.All this is at cost to the taxpayer and the children and their families who have been failed.The only people who benefit are the lawyers and those who work in the care system.

Where was Peter Black when the SSIW [Inspectors] already knew there were prolems at social services Swansea back in 2004?

This was well covered up from the public evn though it should have come out in the Gilbert case!

We need dissident politicians not crony ones.

Well done for all the hard work you have done in exposing the Lewis Case.

Your hard work have not gone un-noticed.

The Liberal AM should take responsibility,for this case.

they have been quiet long enough.

Peter Black should be ashamed of himself, he new about Lindas case year's ago,so why? has he remained silent for all these years if he cared PPeter Black is a waste of time.

I'm a Friend of Linda and her Family what people need to realize they are good honest people who did not deserve to have their daughter /grandaughter removed from their care,

No child is safe if this can happen to Linda then people need to wake up their Child could be next.

Kevin I have never met you but I would like to Thank You for helping.

It's only good men like yourself who exposes,injustices.well done good luck.

Hitler though he was untouchable until good men spoke out.

I thought Peter Black was a good Man,how stupid was I.

Surely alarm bells should have rang COVER UP.

What a COP-OUT LETTER

Happy New Year to all the Supporters of Linda Lewis

Good Luck in breaking this dreadful case in 2012.

Reading AM Peter Black letter made me feel sick.

I have been a Member of the Liberal Party for Year's

I thought they were different from the other main parties.

They have allowed this Crime to contiue by remainig silent.

I respect the way in which you have highlighted the case,

I will be looking to join Britain First Next Year.

I am a Christian and beleive what goes around,comes around.

Heartfelt Sympathy for everyone involved in this Scandle.

I have spent hours reading the
Justice 4 Linda Lewis story.

Could you tell me if there is a fund set-up for Linda Lewis. If so I would like to donate money to help.

you seem to be the only Councillor speaking out for the people.

I have 3 Children myself and i find it very desturbing what is happenning in our Country.have the mum been in touch with the Police.


Wishing you a Happy New Year

I know Peter he is a good Man.
I'm sure he will give the case his full attention now that the injunction is broken.

I can't understand why the Evening Post got involved.

There need's to be a full investigation into childen Care Services they are evil.

And those who have abused them be brough to Justice.

They cannot hide behind an illegal injunction anymore.

You have published the evidence and have ignored the injunction good on you.

I will leave a comment on Frank Little site,tell Linda we were thinking about her over Christmas we wish her a happier New Year

To all those involved in abusing the family, you should be given a prison sentence,there is enough evidence to convict you all.

Hi Kevin just sent a letter to AM Peter Black.

As for Peter Blacks Letter the Government should be invesigating him for sitting on the fench.

Do anyone know if Peter Black been contacted, to see if he has included justice for Linda LEwis case in his investigation, into Neath Port Talbot Council.

hi is there any chance someone could get hold of me about this i could tell u a few things about neath social services im in the middle of court procedding to get my childen home and could really use some help my email is csslvsy@hotmail.com thanks x