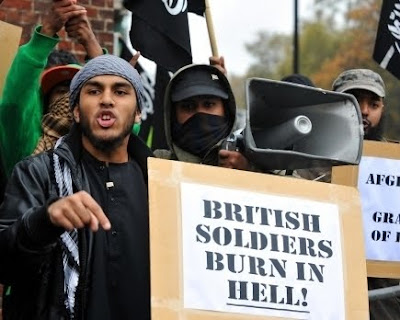 Listen to the chants of some of the vile creatures that the traitorous politicians have flooded our country with, as they burn a giant poppy on one of our nations most sacred days. Remembrance Day.

Is this what our fathers, grandfathers and ancestors fought and died for, just to give these followers of a dead paedophile the freedom to besmirch their memory.

All you people who still vote for the Lib/Lab/Plaid/Con parties are as guilty as those who screamed their hatred and put the match to the Poppy.
Not long ago, six people were arrested in Gateshead for publishing videos on the internet of a koran being burnt. I look forward to reading about the arrest of these filthy enrichers who committed this hateful act being arrested.

An absolute disgrace from the followers of the "Religion of Peace."

In this article 280 young muslims collected money around London for the poppy fund. Yet you still focus on 30 idiots, because they add weight to your argument, because absolute biggots like yourself can play on stories like this and add to the growth of islamophobia in the west. You cannot make a judgement of a religion based on 30 people I'm afraid. Yes there are sects of Islam that are threatening to national security, but surely holding the whole of the group responsible is wrong? Yes Jihadists are trying to impose their values on the world, but they a minority. I will repeat this: They are a minority!

Tell me Kevin, whats the difference between Britain and America killing innocent people day in, day out in the middle east, and any terrorist attack on the western world by a Muslim in the last 10 years?