Mother Language Day in Neath Port Talbot. Hywel Francis your MP is happy for Welsh to lose it's unique identity in South Wales 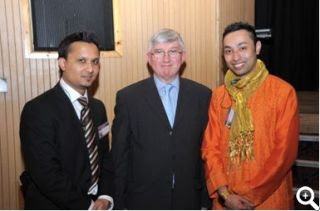 The following is taken from www.thegreenarrow.co.uk
.
The Labour MP for Aberavon, Dr Hywel Francis, son of the Communist miners' leader Dai Francis, recently hosted an International Mother Language Day in Port Talbot, Wales.
.
Why Francis, who is a Welsh Speaker, thinks it a cause for celebration, that so far gone is Wales that there are now 21 languages dividing Port Talbot instead of the usual two, English and Welsh is beyond me.
.
‘I was honoured to be invited to host this wonderful event involving twenty one languages spoken locally.
.
The Neath Port Talbot Tigers are to be congratulated on an evening which attracted over 300 people to celebrate our local cultural and linguistic diversity.’
.
All that event shows to me, is how far the colonisation of Wales has advanced.
.
It also means to me that there must be a big increase in costs to meet the "needs" of the new "Welsh" who are slowly but surely displacing the real owners of the Valleys of Wales.
.
Come on Men of Harlech.
.
Help the British Resistance stop the colonisation of Wales by joining and voting for the Welsh BNP.
Posted by Kevin Edwards at 17:46:00

That creature Francis disgusts me. Francis is a wealthy man by local standards and does not have to compete with immigrants to get a job. He is an absolute hypocrite and I despise the man. People like Francis make me want to vomit.

He, Hywel Francis, does not live in the real world like the rest of us. He has more than one house, and a well paid job with an excellent pension, paid by the tax payer.

If the people of Aberavon vote for this LEECH again they are truly ignorant.

There is only one option available for the people of Aberavon, and that is to vote BNP.

Here Here,
Hywel 'choclate teapot' Francis does not do his job which he is paid to do!
His constituents asking for help with their problems and he sends a letter out that he is unable to help.
What MP does this? this freeloader needs to get a reality check on his duties and raise his snout from the trough!!

Hywel Francis is a crook and a Charlatan.

This is proof that New Labour have " deliberately imported immigrants" to engineer their vote.

A "Mad Dog With Rabies " can see this, we all can.

Voters of Aberavan for thye love of God and vote for Kevin.

The talk in the pubs is that you Kevin are getting through.

I have not met anyone who has spoken against you.

We want you here you are dynamite.

Fairfield Supporters of the BNP

This thick skinned arrogant clown thinks it is ok to dilute this Welsh town and expects us to thank him for it, Hywel your no Welsh man and you shall be told when you come knocking on our doors one week before the election, BNP been out spreading the good word since August whatever the weather.
You have so many people that would like to tell you what they think and you have done absolutely jack diddly sh*t in this town and fighting for train station access for the disabled is not what our community wants for priority needs.
You turn a blind eye to corruption and the elderly asking for help that are being hounded every week in their homes by youths, they have asked you for help and the police, yet you do nothing.

Pick your P45 up on the way out! Hwyl

Oh I, while i remember, don’t run away from Linda Lewis when you’re in town on campaign duties lying to the public with knowingly false promises, and all the Justice for Linda Lewis friends would like to ask you a question about child kidnapping

This Muppet wants his picture in the paper to prove he still exists.
He does not care about his own people he is using foreigners for votes.
What is going through this man's head when he runs a mile from Linda Lewis.
Being all "cwtshi" with John Morris has made this man dillusioned. He is covering up for something big.
Where has all the missing children gone Hywel?
I notice Gareth Wardell is still around.
Do you ever meet up?

Teamninja used the words "Simple answer GUTLESS, SPINELESS and damn right USELESS"
I work in a Local Authority, we have a group of troublemakers like this. We call them the "Kipper Club." If you are in the kipper club you get protected and promoted.
Mutch like " that farmyard" at Westminster really.