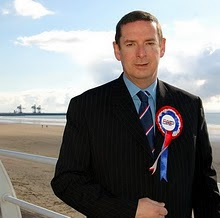 I was recently asked to contact the South Wales Evening Post for an upcoming article on the Aberavon Constituency.
.
This was my response.
.
Profile
.
Councillor Kevin Edwards
.
First of 3 BNP Councillors in South Wales also Policy and Development Officer for the Party.
.
Age 49 Work Area Sales Manager
.
Main issues in the Constituency
.
Jobs and Housing.
.
Biomass AND Gas Power Stations not wanted by majority of residents with which I agree as Port Talbot has the second most polluted Air in the UK and the most polluted in Wales.
.
Hywel Francis expenses, the fact that he employs his wife on a salary that is not in the public domain and is an invisible and ineffective MP as far as many of his constituents are concerned.
.
Neath Port Talbot Council are seen as unaccountable and corrupt and the Councillors do not represent the people.
.
Threatened Social Care Home and School Closures as well as the down grading as I and the electorate see it of the local general hospital almost to cottage hospital status.
.
"JUSTICE FOR LINDA LEWIS CAMPAIGN " is huge. Over 3000 people have seen the evidence that NPTCBC Social Services have acted illegally in "KIDNAPPING" Miss Lewis daughter at gunpoint from her hospital bed in America to cover up for medical negligence in South Wales. The momentum that this campaign carries is HUGE ! People are " sickened that their Council have been able to get away with this for so long.
.
If elected I would

Ring fence 10% of my salary after tax to be donated to worthwhile causes and projects within the constituency.
.
I would not claim the extortionate rate per mile currently given to MP's when travelling by road. I would only claim on receipts whatever fuel went into my tank.
.
Rail travel would be at the lowest possible fare and would always be "Second Class."
.
I would order and immediate and independent investigation into the running of Neath Port Talbot County Borough Council. I would not allow a politically correct whitewash.
.
I would be visible and proactive Member of Parliament and would work on behalf of all my constituents and would not be afraid to speak out on their behalf.
.
Regards
.
Councillor Kevin Edwards
Posted by Kevin Edwards at 17:37:00

At last an honest man to vote for.

A disgusting monstrosity rotten and stinking.

Get them exposed and make them accountable.

You will a fine MP Councillor and I look forward to that day.

I have met you and you are an OK Guy you gave me your time and I will give you my vote.

The Lib Dems called today and called you a fascist.

I might have believed the if you had not told me about waht the NUJ demand.

Keep Going my friend You can get there.

An eye opener from a politician.

Do not be disappointed as I don't think that you will get everything that you have said printed.

Th EP are Labour orientated always have been and always will be.

They are biased and will continue to be so.

I hope enough people who know about your website will have read this.

You deserve a chance.

Please could you look into how Cwmafan reservoir became into the hands of Mr James and his family.
There was a trout farm and one day unfortunately all the fish were robbed (big sack) and a security hut was built to keep people out and all of a sudden there is a huge house built and sign erected to keep off the public walkway for ramblers and now ever increasing land is being taken up for the saw mills when it is situated in a village and I’m sure he should be on an industrial estate for his huge lorries the are ruining the roads into Cwmafan.