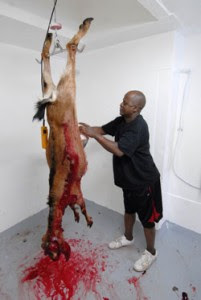 The man behind the development of an Islamic stock exchange hopes to cash in on the Government’s tax breaks by opening a £150m, 100 acre ‘super halal industrial park’, in South Wales.

Director Mahesh Jayanarayan said that the plans depend upon taxpayers’ money, using the euphemism ‘government grants’.

The Welsh Assembly Government has a history of luring businesses to Wales only to see them flee when the grants end.
The scheme is promising to generate 3000 jobs for the Muslim and non-Muslim community, however, the director went on to state that they had chosen Britain and specifically South Wales because of its local Muslim colonies.

Further to this, just 18 months ago the Government announced plans to import 5000 halal butchers from Pakistan.
“There are a lot of Muslims in Britain, and in Wales, which is important from our point of view. The industrial park will fit in very well in Wales,” said Jayanarayan.

So what is Halal ?
Halal slaughter is the ritual killing of fully conscious animals.

The procedure involves sawing into the neck of the animal, severing the carotid arteries and jugular veins; whilst leaving the spinal column intact.

Muslims insist that this kills the animal instantly but brutal footage demonstrates that large animals — such as horses and cattle — can take as long as 10 minutes to die.
Common malpractice seems to involve the use of blunt knives that fail to sever the blood vessels, and serves up an extremely slow and painful death.

The Royal Society for the Prevention of Cruelty to Animals (RSPCA) has so far failed to lobby Parliament for the outlawing of this barbarity, perhaps fearful of angering the Islamic community.

The organisation was heavily criticised last year when it failed to pursue the prosecution of an Islamic butcher who slaughtered a fully conscious lamb on a British military base.

They concluded that this did not constitute ‘unnecessary suffering’, yet the act was carried out on a base where firearms were available.
Directors hope to see the construction of this gigantic animal hell within three years.
At least the pigs are spared !
Posted by Kevin Edwards at 17:32:00

Barbaric and should be outlawed in the UK.

No doubt Hywel Francis would welcome this house of suffering in Port Talbot.

What can we do if this comes near to where we are in Port Talbot/Aberavon ?

My god will it be a 24 hour operation will we hear the suffering throughout the day.

Please God not on my back yard.

How sickening is this process that is being implemented to Wales.