" A NEST OF THIEVING CRIMINALS ROBBING THE PUBLIC PURSE." Do you really want these SWINDLERS back in Westminster after the Election ? It's your choice 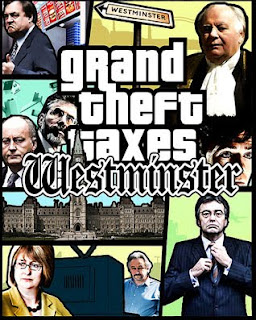 Yesterday’s Legg report proved conclusively that the old parties — Tory, Labour and Lib-Dem — have degenerated into a nest of thieving criminals who have enriched themselves mercilessly at the expense of the taxpayers.
In his report, Sir Thomas Legg revealed that more than half of all MPs, 360 in total, had made “wrongful” (i.e. fraudulent) claims.
However, not even this tells the full story, as almost 50 more MPs have made separate repayments.
This means that a grand total of 410 MPs have been named as swindlers — fully two thirds of the entire House of Parliament.
In addition, three Labour MPs and one Tory peer will face criminal charges over their expenses, Director of Public Prosecutions Keir Starmer has announced. MPs Elliot Morley, Jim Devine, David Chaytor and Lord Hanningfield will be charged under the Theft Act.
“In four cases, we have concluded that there is sufficient evidence to bring criminal charges and that it is in the public interest to charge the individuals concerned,” Mr Starmer was quoted in reports as saying. “Accordingly, summonses in these cases have been obtained from the City of Westminster Magistrates’ Court and will now be served on the individuals in question.”
Sir Thomas’s report showed that the swindle was far more widespread than what was originally thought.
The review specifically criticised the old party gang for “putting personal gain before protecting public money.”
Local Government Minister Barbara Follett has the highest single repayment to make, more than £40,000.
Sir Thomas found that almost one third of MPs wrongly claimed for mortgage interest, improperly receiving more than £700,000.
More than a dozen former MPs have failed to meet demands for repayments running into tens of thousands of pounds.
The scandal is likely to run even deeper, as Sir Thomas did not even start to investigate the “house flipping” issue whereby MPs designated first and second homes in a merry-go-round to claim the maximum cash from the taxpayers.
Sir Thomas attacked the entire expenses system, describing the rules as “vague”, with MPs “self-certifying as to the propriety of their use of the allowance.”
“A particular challenge has proved to be the widespread lack of proper evidence on the record from MPs to support substantial payments, especially of mortgage interest, even though this was expressly required by the rules,” he said.
MPs named as not yet having paid back their swindled cash include:
Employment Minister Jim Knight, £2,185
Immigration minister Phil Woolas, £886.16
Tory MP Sir Peter “duck island” Viggers, £13,245.80
Labour MP Margaret Beckett, £2,539.75
Former defence secretary Geoff Hoon, £767.66
Former minister Claire Short, £2,588.80.
Posted by Kevin Edwards at 11:32:00