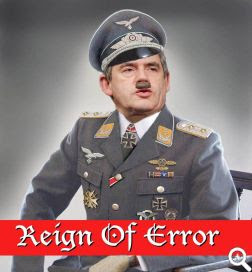 Labour is telling its workers not to campaign on the party's record in power, a leaked document showed yesterday.
The revelation came ahead of today's launch by Gordon Brown of Operation Fightback, at which he will tell activists to wage a political scrap for survival.
Mr Brown wants to use the launch rally to give Labour some momentum after months of dire economic news and setbacks.
But the leaked document is an astonishing admission that voters have little to show for 13 years of Labour rule.
Source.

http://www.dailymail.co.uk/news/article-1252459/Dont-mention-record-power-Labour-orders-election-activitsts.html#ixzz0gC8efpJm
Posted by Kevin Edwards at 17:59:00

Dont mention either that hes is a BULLY !