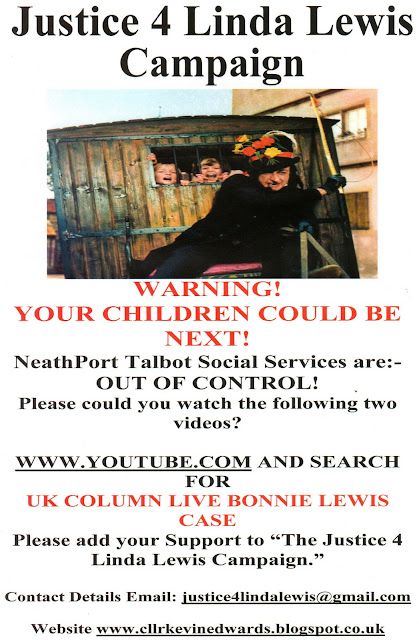 We have recently received delivery of several thousand of the above A5 leaflets for general distribution as well as A3 Posters for display.

The A5 leaflets will be delivered house to house and will be handed out by teams in town centres and outside the constituency offices of Criminal Members of the Welsh Assembly Government when they are holding surgeries.

The Criminal Welsh Assembly Government will also become a venue for us to get our message out directly regarding this crime committed by Neath Port Talbot Social Services against an innocent sick 12 year old girl , her mother and family.

They will also be prominently displayed on car windows that will be driven around as a tool for spreading our message of injustice under public interest law.

Many local businesses have agreed in principle to display the A3 posters and so have many local residents in prominent locations by placing posters in their windows.

This article will be forwarded on by our many supporters by the usual channels with an emphasis on forwarding onto friends on Facebook.

Anyone who wishes to download/print copies please feel free to do so.

It is obvious to anyone with half a brain that a serious crime has been committed by Neath Port Talbot Social Services which is being covered up by the Welsh Assembly Government.

It's time they came clean.

More information on this terrible crime can be read by Clicking Here
Posted by Kevin Edwards at 17:33:00

First team of leaf letters will be out tomorrow Wednesday 10/7/2013.

First batch out today in Margam more going out tomorrow

Another load out last night

Worth a read Kev

A small band of Canadian Members of Parliament led by the fearless, John Weston, (shown in photo on right) have demanded that Canadian Minister of Justice, Robert Nicholson, (shown in photo on left) respond to serious concerns by Canadian citizen, William Morgan that a group of criminal Freemasons have infiltrated the courts of Canada and are fixing law cases to benefit brothers and cheat innocent citizens.

Now that the cat is out of the bag, is it now safe to ask as to whether this drug was used to experiment on Carwyn Jones' Bridgend doorstep and South Wales teenagers.
There are controversial clinics both private and NHS in Bridgend that no one really knows what goes on there.
http://www.dailymail.co.uk/news/article-2362668/Head-30-000-school-nephew-died-after-taking-acne-drug-sacked-Racing-legend-Jenny-Pitman-death-sisters-son--aged-just-16.html

I enjoyed it out there today Kev.

What sickens me more than anything as far as this case is concerned is that LINDA WAS NEVER ALLOWED TO HAVE DOCUMENTS proving what they have done.

One day very soon they will pay.