Thanks to Rzezniczek-watch for the Hat-Tip.


I have just been informed that the disgraced former Head of Neath Port Talbot Children's Services Social Services Julie Rzezniczek who recently left the authority by " Mutual Consent " has decided to continue to inflict her own form of child and family abuse by setting up her own  company. 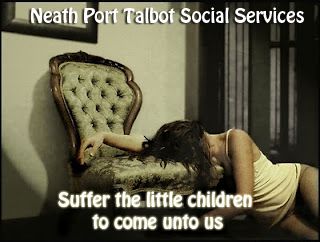 The truth is and it is well known locally and nationally that she was sacked as she had become an embarrassment to the local authority and most importantly The Welsh Assembly Government who are desperately trying to keep the cover up over her actions in kidnapping Linda's daughter at gunpoint from her hospital bed in America with a false passport hidden.


The Registered Companies Number is 7915974 and the  contact details are


It is absolutely amazing that the likes of Julie Rzezniczek who should be in jail for her crime of kidnapping is still allowed to ply her evil trade as a free woman.


But it is hardly surprising !


Remember David Johnston the former Welsh Inspector of Social Services who deliberately fabricated and entered false and fraudulent evidence into a secret court ? click here to read the worldwide press release which has raised a lot of eyebrows and has created a phenomenal amount of interest.


Well before he was recently appointed Head of Corporate Parenting at Suffolk County Borough Council in Children and Young Peoples Services. Email :

"Skylakes is a Social Work business that’s paid for results."
To view their website click here
Further information coming to light is the alleged role played by David Johnston in the North Wales Child Abuse Enquiry Cover Up of 1998.

I am led to believe that evidence from victims in North Wales and the North West of England is currently being obtained and collated and should be with us soon.

To the growing number of supporters of the " Justice 4 Linda Lewis Campaign " worldwide it is a repugnant thought that Rzezniczek and Johnston are not behind bars and are still allowed to practise their evil trade.

But when we realise that our elected officials are themselves criminals it is not really surprising.

Evil Bitch should be in Prison.

She will be just give it time

Another evil member of her Cult that supports child abuse recommends her services.
Jake Morgan - Carmarthenshire says An outstanding colleague and Head of Children's Services who led on a range of cross Wales initiatives on behalf of the 'All Wales Heads of Children's Services'. Extremely knowledgeable about systems thinking and its application in a children's services context. Expert knowledge in Child Protection, Looked After Children Services and developing services for vulnerable children." January 26, 2012

Do we have another lunatic as head of children services in Carmarthen.

2 - Under Common Law we legally and peacefully can perform a citizens arrest on this creature and remove her without violence to an independent police force outside of Wales where we can demand her immediate arrest based on the evidence that we have on the charge of " Kidnapping " for which there is NO time limit .

3 - Fforestfach is a far easier place to do this as access to the M4 is much easier than the Mumbles.

4 - Many of Linda's supporters are prepared to interview this creature on video to question her about her crimes and post on You tube.

5 - The exposure that all Assembly Members are now complicit in this creatures crimes by their silence is an incredible victory for the campaign.

6 - Many things are happening on many fronts all positive and will bring this crime to a head no matter what criminal politicians and Councillor's may think.

7 - Their attempts to keep the " Cover Up " in place are proving more futile and desperate by the day.

Together we will get there.

Evil beyond belief... A twisted lesbian making decisions on the family unit..... Sick

on a serious note this woman should be on trial for kidnapping a Child.

Although the evidence proves that Julie Rzezniczek kidnapped the Child.what I would like to know on who's Order's

There would have been far more powerful people behind the kidnaping.

This woman should not be allowed her own business working with Children.

When will she made accountable for her actions in taking a Child against her will.

I have read the evidence there is no doubt about it,the Child was Kidnaped.

There need's to be a police investigation into Julie Rzezniczek.

Surley she should not be working with child.

Julie Rzezniczek should never be allowed to work with Children.

Is there anyone doing any investigation on the evidence you have provided on your blog.If so who?

why? has it taken so long for an investigation when the evidence is overwhelming.

Like to know how a Social Worker as the Power to remove a Child from another Country.

Just a thought
I'm sure the Daily Mail would be interested in writing a story about Rzezniczek.

We need to protect our children from this "Social Worker" she should be brought to justice, before she does the same thing to another child.

Protecting our children is more important than anything else.

I'v said it, before and I'll say it, again government should be involved in the Linda Lewis Case.

Thank you for helping the family

Social Services are out of control they don't seem, to be accountable for their actions.They are removing children from loving family's and this has to STOP! I'm Glad to see there are people out there like yourself fighting for these Children.

There is NO! Excuse for the way in which the Child as been abused and kidnapped.

Excellent work keep going and I beleive those who have done wrong will be punished.

any ideas if the failed head next door in swansea - Roszkoski got a job after retireing even though he was culpably negligent in the case of aaron gilbert - he had been warned things were bad in his dept yet did nothing except later covered up.

maybe a new council will shake things up - [or maybe not]

It's happenimng right now in the Maosn Case in Neath