You and I know that the corrupt political elite will pull out all the stops to prevent this.But we intend to raise hell! 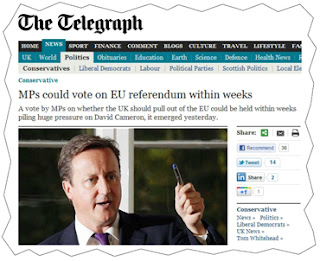 A Message from Paul Golding Coordinator of Britain First


Fellow patriot
In previous emails, I explained how the campaign for a referendum on Britain's membership of the EU scored a victory when a petition of 100,000 people forced a debate in Parliament.
However, forces are at work to thwart the will of the British people!
This debate, we were told, would take place 'before Christmas'.
Well, the gauntlet has finally been thrown down!
This is from today's Telegraph:
"A powerful parliamentary committee is expected to confirm plans for a Commons debate on an EU referendum when it meets tomorrow and could set a date for it within the next three weeks."
This is a once in a generation opportunity to make a real difference, and to get OUR voices heard!
Just imagine waking up to headlines in the newspapers stating that Parliament has voted in favour of an EU referendum!
David Cameron and the liberal elite are aghast at the prospect of a referendum.
This is from a Conservative party source: "Cameron will move heaven and earth to stop this. The last thing he wants is a Commons vote demanding a referendum."
Mr Bone, a member of the parliamentary committee about to decide the date of the debate, said:"The Government cannot stop this going ahead; although I am sure they want to."
"The Government should make this a free vote as this is a matter that has come from the people, not from the Government. MPs should make up their own minds." 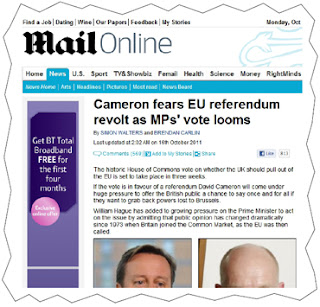 We disagree! We believe our MP's must vote in accordance with the will of the British people!
It is up to each of us to do all we can to influence their decision and put the truth before them.
The consequence of this parliamentary vote could be momentous: an actual referendum on Britain's membership of the EU is within our grasp!
You and I know that the corrupt political elite will pull out all the stops to prevent this - that's why we must act now to combat their threats.
David Cameron is worried - this is the headline from yesterday's Daily Mail:"Cameron fears EU referendum revolt as MPs' vote looms."
We must move quickly, organise fast and utilise every strategy at our disposal to force our MPs to do the honourable thing and let the British people decide.
This is why Britain First is launching a big push to apply pressure on our MPs - we intend to raise hell!
Here is what we intend to do with your help:
This crucial campaign will therefore cost around £2,000.
This is an historic moment for Britain, and one where YOU can personally play your part!
Please get behind our campaign and send an urgent financial gift today.
This is YOUR fight!
Gifts of £10, £30, £50, £100 and even £250 are all desperately needed.
A large gift of £500 would get the campaign off to a flying start!
Britain is in danger of being comsumed wholesale by the EU once and for all!
This IS the chance we have all worked towards for years, so let's not waste it.
It's time for that final push, so let's get busy.
Please click on the link below and join the fight today:
http://britainfirst.org/eu-campaign/