Neath Port Talbot will be like Milton Keynes within 10 years on current trends. Frightening ! 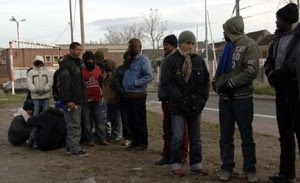 The rapid colonisation of Britain by the Third World continues apace with the news that the town of Milton Keynes now boasts inhabitants who speak over 104 different but mostly Third World languages.
.
The dramatic influx of colonisers has placed a huge burden on the council to pay for translation services for the tidal wave of immigrants who have settled in the town.
.
This cost will ultimately be transferred onto the taxpayers either through council tax increases or central Government subsidies.
.
According to reports, more than eight dozen languages, including obscure West African and Indian dialects, have arrived with waves of new migrants over the last decade.
.
The local authority has had to employ more than 300 interpreters to cope with the influx of spongers.
.
The Milton Keynes Community Language Service (MKCLS), paid for by the council, has increased the number of interpreters by 15 times over the past decade.
.
Only ten years ago it was required to provide interpreters for 12 languages, compared to the 105 now required.
.
Some of the languages indicate the extent of the Third World invasion, and include Twi, a language in Ghana; Telugu, spoken in India; and Yoruba, used in Nigeria.
.
Incredibly, preparations are underway to recruit a further 20 interpreters and the Afghan language Pashto will be added to the council’s repertoire by the end of the year.
.
The MKCLS provides a free 24-hour service to immigrants to enable them to “understand housing, health, police and legal matters” in Milton Keynes and the neighbouring towns of Luton, Bedford and Northampton.
.
What this means is that these fresh-off-the-boat immigrants have to be taught how to apply for benefits and how to deal with what seems to be an inevitable run-in with the police and criminal justice system.
.
“It's ridiculous that people are claiming benefits for years but can't even fill in a form about themselves in our national language,” Matthew Elliott, chief executive of the TaxPayers' Alliance was quoted as saying in response to the news.
.
Hywel Francis according to the following article is delighted that 21 languages are now spoken in Neath Port Talbot.
.
http://cllrkevinedwards.blogspot.com/2010/04/mother-language-day-in-neath-port.html
.
He will be ecstatic when Neath Port Talbot is turned into another Milton Keynes !
.
Will you be ecstatic is the question that you need to ask yourself ?
.
Posted by Kevin Edwards at 19:14:00

No I will not be ecstatic this is a terrifying thought.

Where will they all live ?

They will live in our council houses or our housing association houses because being British comes second to immigrants and illegal immigrants on the priority housing list, or under Neath Port Talbot housing policies their properties are listed on the internet for any Tom, Dick and immigrant to see what they require.

Hywel 'chocolate teapot' Francis will not change the policy just the same as the Justice for Linda Lewis campaign gets pushed to the back of the airing cupboard.

The only way that this can be stopped is by voting BNP.