Disgusting New Labour starts to get some of it's own medicine back. "The people are waking up. Thank God for the BNP." 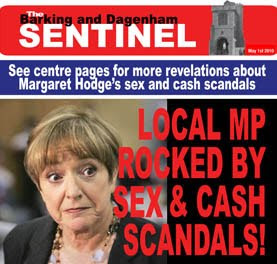 The Labour Party, which has long used a number of third party front organisations to attack the British National Party in a blatant disregard of the democratic process, has been hit by its own tactics with the distribution of a 12-page magazine in Barking devoted to exposing sitting MP Margaret Hodge.
.
The magazine, called the Barking and Dagenham Sentinel, is a full colour publication which details sex, cash and personality scandals which reveal the MP as unfit to hold office.
.
“The BNP has long been the victim of these third party campaigns and it seems that the Labour Party is getting some of its own medicine back,” said BNP leader Nick Griffin, who is fighting Ms Hodge’s seat.
.
“This magazine has been produced by a loose coalition of non-BNP people,” Mr Griffin said.
.
The magazine, currently being distributed in the Barking constituency, discusses how Ms Hodge was a “loony leftist” who, during her tenure as council leader in 1982, flew the red flag over the town hall and had a bust of Lenin on her desk.
.
In addition, the magazine says, she ignored repeated requests from social workers to do something about the sexual abuse of children in Islington Council Care.
.
The magazine also details Ms Hodge’s parliamentary expenses claims.
.
The MP, who is the richest woman in Parliament with a £50 million personal fortune, claimed for organic coffee and biscuits — and even a 25 pence carrier bag — from the taxpayers as part of her expenses.
.
The entire document makes riveting reading and can be downloaded from the Internet by clicking here.
.
PLEASE NOTE.
.
This woman knows about " The Justice for Linda Lewis Campaign." and the abuse that Linda's daughter has suffered and has covered it up.
.
Just like Hywel Francis and Dr Brian Gibbons she has ignored the abuse Linda's daughter has suffered and the pain that has been inflicted on Linda's family.
.
These "PARASITES " deserve to go and will be exposed and brought to justice.
.
By voting BNP I will bring them to account.
.
Hywel Francis expenses can be seen at the following link.
.
http://cllrkevinedwards.blogspot.com/2010/04/hywel-francis-rides-gravy-train.html
.
My own personal promise on the abuse of children and paedophilia can be seen at the following link.
.
http://cllrkevinedwards.blogspot.com/2010/04/my-pledge-on-paedophilia-and-abuse-of.html
.
I have emailed Hywel Francis on behalf of the "Justice for Linda Lewis Campaign " with this link.
.
Below is my email.
.
Date:
Tuesday, May 4, 2010 1:16 AM
From:
kevinedwards@ntlworld.com
To:
aberavon@yahoo.co.uk
Subject:
"Justice for Linda Lewis "
Size:
782 Bytes
Dear Hywel Francis.

Do you still have the evidence that Linda Lewis gave you in good faith hidden in your safe ?

Are you still prepared to be part of this "sickening and evil" cover up ?

Kevin Edwards
.
Will he ever have the nerve to show his face in Aberavon again ?
.
Kevin
.
Another link that is well worth a look.
.
http://cllrkevinedwards.blogspot.com/2009/08/she-wants-to-close-bnp-down-and-also.html
Posted by Kevin Edwards at 00:44:00

Seems like our MP has something to hide big time.

So it is not just Hywel Francis and Brian Gibbons who cover up child abuse.

Labour politicians all seem to be at it.

I really hope you win on Thursday. I have obtained promises of another three votes for you from my brother, my neice and my mate.

How much longer before the guilty go down ?

Linda's case cannot be hidden for ever.

Shame on all of them.

Go get them Kevin.

I like many others have seen all the evidence Dr Brian Gibbons is a complete shit.

He broke Linda's heart 2 days before Christmas he promised her he would sort it out and he quite simply bottled it.

He should be in front of a jury as well as Francis.

He has done nothing for us and I am tempted to visit him at his " Superior Dwelling " in Blaengwynfi.

I know Linda and her family and I was in school with her daughter.

Her daughter N*TA*HA was my friend.

Labour and the cronies make me sick. At least we have a chance of an MP with integrity and I feel sure Kevin will give at least a good account of himself and prepare the ground for next time. I just found out that my two brothers are voting BNP and one hates politicians and doesn't trust them at all to the point where they cannot do anything right. But he is voting for Kevin, so that says something. All my family are voting BNP including five in Swansea. Good luck Kevin. Can't wait to see Hywell's face when he loses his job.