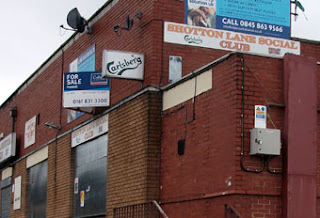 British National Party North Wales Secretary John Walker has revealed that a Muslim already charged with importing illegal immigrants into Britain is behind a new attempt to create a 400-seat ‘Islamic Cultural Centre’ in Deeside.

Mr Walker, speaking prior to the launch of a new campaign against the attempt to further Islamify Deeside, said that the plans to convert the old Shotton Lane social club into an ‘Islamic social and cultural centre’ is being led by the owner of the Bengal Dynasty restaurant, Mohammed Monchab Ali.

“Mr Ali was charged in 2008 with employing illegal immigrants at his restaurant,” Mr Walker, who is also a councillor in the area, continued.

“It is therefore not surprising that Mr Ali’s ‘Flintshire Muslim Cultural Society’ (FMCS) is spearheading an attempt to buy the old Shotton Lane social club to redevelop it into what they claim is an Islamic social and cultural centre.

“On the FMCS website, it is claimed that there are two main halls inside the club which together can accommodate 400 ‘participants’ for whatever they are planning,” Mr Walker said.

“We know from previous ‘cultural centres’ which have been established elsewhere in the country that a mosque inevitably follows as larger and larger numbers of Muslims are drawn to these areas,” he continued.

“The fact that someone who has already been involved in the importation of illegal immigrants is behind this latest attempt to further spread Islam in Wales, should tell everyone exactly what is going on.

“There are already nearly as many Muslims in Britain as the entire population of Wales, and what is happening is nothing else but the colonisation and Islamification of our country,” he said.

The party’s plans to protest Mr Ali’s plans include street activism and the distribution of leaflets highlighting the issue.

“We strongly oppose a development of this kind in the heart of our community. Deeside has had its fair share of immigration over the years, but this is a step too far,” Mr Walker said in a new leaflet which is being launched in the area.

“It will attract more and more newcomers to live in this area which will undoubtedly lead to community tensions and nobody wants to see that.

“I am also concerned about potential parking problems in Shotton Lane, not only during Friday prayers but through the whole week. The current shortage of social housing would be made even worse if large numbers of people move in to live close by the centre.

“With declining church attendances and the local clergy falling over themselves to welcome other religions into the area, what future does Christianity have in Deeside?” the leaflet said.

Mr Walker also distanced himself from reports that the EDL was planning to protest at the scene.

“I am against this proposed protest by the EDL. This issue should be solved politically, at a local level,” Mr Walker was quoted in a local media source as saying.
Posted by Kevin Edwards at 20:22:00

great blog as always,we also have a big problem in swansea as shown here http://winstonswarrior.blogspot.com/2011/01/jihads-on-streets-of-swansea-outside.html