This man should be in jail for war crimes and his betrayal of the British people but next year he will be worth £45 million pounds. 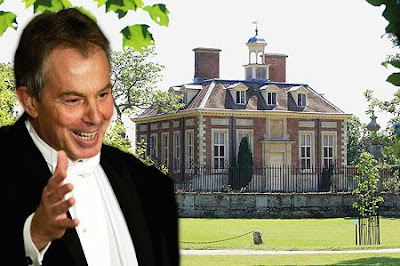 Tony Blair’s fortune is set to treble to £45million next year as he returns to his lucrative career after appearing at the Iraq war ­inquiry.

The former PM and wife Cherie are building up a property empire and Mr Blair now plans to maximise his earnings over the next two years.

Mr Blair – who will be 57 on the expected General ­Election date of May 6 – wants to build up a “substantial” retirement nest egg before he hits 60.

His earnings this year alone could hit £15million, on top of the estimated £15million he has raked in since standing aside as PM in 2007.

A ­further £15million next year through Mr Blair’s jobs, ­ speeches and expanding property empire would take his estimated family fortune to £45million.

Mr Blair’s millions are paid into a complex network of companies involving up to 12 different bodies – making his exact riches hard to calculate.

The Blairs have six luxury homes worth more than £14million – the latest was bought for ­£1.13million cash last ­September. Their main home is a ­£4.5million mansion – bought for £3.6million – near Hyde Park in London.

They extended that property by ­buying an £800,000 mews house behind it.

The Blairs’ country home is a Grade I listed pile, once owned by Sir John Gielgud, worth an estimated £6million.

There is the infamous apartment in Bristol, bought by Cherie with the help of Aussie conman Peter Foster, for her eldest son Euan while he was at ­university. It is now worth an estimated £300,000.

Mr Blair’s ­constituency home in County Durham was put up for sale last year for £300,000 – 10 times what the couple paid for it in 1983 when he ­became MP for Sedgefield.

The former PM also has a number of highly paid jobs which bring in between £5million and £9million a year.

His latest money-spinning contract – a role with hedge fund firm Lansdowne ­Partners – is expected to earn him £250,000 for just four speeches.

He has a £2million deal with Zurich Financial Services and has been signed up by Random House to publish his ­diaries for £4.6million.

On top of that he gets a prime ­ministerial ­pension of about £65,000 a year – and Britain contributes to the cost of his office staff and 24-hour security.
Posted by Kevin Edwards at 17:14:00

Lets hope they kept the rope that hung Saddam.
It can be used again for this sadist of an Anti Christ.
With hindsight; a rope will not work with this demon disguised as a human being. It has to a be a stake through the heart job. Let the public beware, stock up on your garlic as this aborition disguised as Tony will soon have his followers on their doorstep.
Another aborition walks the street of Neath wearing orange makeup; he is disguised as Peter Hain.

Peter Hain and Blair are equally revolting, money grabbing parasites and care nothing about the avaerage bloke in the street.

May both their souls burn in hell for eternity...then again, eternity is not long enough.

Blair like the rest of the Labour politicians is a Grade A Liar.

Why hold this enquiry when we all know he will walk away Scott Free and live a long and profitable life ?

He should be in prison it is only the guilty that have justice today. The innocent are suppressed and have no voice.

This evil creature is guilty of Treason and mass murder. Yet he is still free to be feted by his partners in crime and the ignorant.
His masters must be so proud of him.
Well one day, we will be in power and "They" will all be hunted down and punished.