At last we know the truth: Labour despises anyone who loves Britain, its values and its history.New Labours appalling abuse of power ! 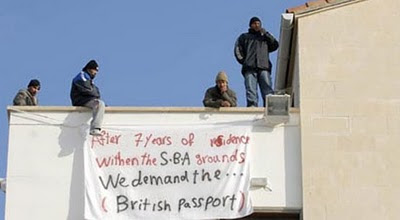 Of all the issues of concern to the public, immigration is possibly the most explosive - and the one about which the most lies are continuing to be told.
During the period that Labour has been in office, mass immigration has simply changed the face of Britain.
The total number of immigrants since 1997 is pushing three million.
Ministers claim that immigration policy has been driven principally to help the economy.
They have always denied that they actually set out deliberately to change the ethnic composition of the country.

Well, now we know for a certainty that this is not true.
The Government embarked on a policy of mass immigration to change Britain into a multicultural society - and they kept this momentous aim secret from the people whose votes they sought.
Worse still, they did this knowing that it ran directly counter to the wishes of those voters, whose concerns about immigration they dismissed as racist; and they further concealed official warnings that large-scale immigration would bring about significant increases in crime.
The truth about this scandal was first blurted out last October by Andrew Neather, a former Labour Party speechwriter.
He wrote that until the new points-based system limiting foreign workers was introduced in 2008 - in response to increasing public uproar - government policy for the previous eight years had been aimed at promoting mass immigration.
The 'driving political purpose' of this policy, wrote Neather, was 'to make the UK truly multicultural' - and one subsidiary motivation was 'to rub the Right's nose in diversity and render their arguments out of date'.

Ministers, however, went to great lengths to keep their real intentions secret from the public - with, said Neather, a ' paranoia' that these would reach the media - since they knew their core white working-class voters would react very badly.
Accordingly, a report about immigration by a government advisory unit, which formed the core of a landmark speech in 2000 announcing the loosening of border controls, went through several drafts before it was finally published - and the Government's true intentions about changing Britain into a multicultural society were removed from the final version.
After revealing all this, Neather subsequently tried to backtrack, saying that his views had been twisted out of all recognition by the media. They hadn't been.
Nevertheless, Jack Straw, who was Home Secretary at the time the immigration policy was changed, said he had read press reports of Neather's remarks with incredulity since they were 'the reverse of the truth'.
Now we know, however, that they were indeed the truth.
We know this only because details of the advisory unit's report which were excised from the final published version - just as Neather said - have been emerging into the public domain through Freedom of Information requests.
The pressure group MigrationWatch obtained an early draft which revealed that the Government's intention was to encourage mass immigration for 'social objectives' - in other words, to produce a more ethnically diverse society - but that on no fewer than six occasions this phrase was excised from the final version, published some three months later.
Now we further discover, from what was removed from seemingly another early draft, that the aim was not just to implement this policy of mass immigration without the knowledge or consent of the British people.

It was done in the full knowledge that the people actually wanted immigration reduced.
And we also discover that those who expressed such concerns were dismissed with utter contempt as racists - and it was further suggested that ministers should manipulate public opinion in an attempt to change people's attitudes.
Well, they have certainly tried to do that by hanging the disgusting label of 'racism' round the neck of anyone who dares voice such concerns.
Thus the eminent and decent Labour MP Frank Field found himself smeared as a racist for daring to suggest that the rate of immigration should be reduced.
What bullying arrogance.
The real prejudice is surely to believe that opposition to mass migration can never be based on any reasonable objection.
The implications of this covert policy are quite staggering.
Ministers deliberately set out to change the cultural and ethnic identity of this country in secret.
They did this mainly because they hated what Britain was, a largely homogeneous society rooted in 1,000 years of history.
They therefore set out to replace it by a totally new kind of multicultural society - and one in which the vast majority of newcomers could be expected to vote Labour.
They set out to destroy the right of the British people to live in a society defined by a common history, religion, law, language and traditions.
They set out to destroy for ever what it means to be culturally British and to put another 'multicultural' identity in its place.
And they then had the gall to declare that to have love for or pride in that authentic British identity, and to want to protect and uphold it, was racist.
So the very deepest feelings of people for their country were damned as bigotry, for which crime they were to have their noses rubbed in mass immigration until they changed their attitudes.
They set out to destroy the right of the British people to live in a society defined by a common history, religion, law, language and traditions.
What an appalling abuse of power.
Yet even now they are denying that this is what they did.
The Immigration Minister Phil Woolas blustered that the advisory unit report had not been accepted by ministers at the time.
But the fact is that mass immigration actually happened.
The only thing ministers hadn't accepted was that the truth about their intentions should be revealed to the public.
Surreally, Mr Woolas further claims that the Government has brought immigration down.
But the reductions he is talking about have taken place on the separate issue of asylum.
The impact of the Government's new points scheme upon the record rate of immigration growth has been negligible.
The truth is that these early drafts of the advisory unit's report have blown open one of the greatest political scandals of the Labour years.
At no stage did Labour's election manifestos make any reference to a policy of mass immigration nor the party's aim of creating a multicultural society.
What we have been subjected to is a deliberate deception of the voters and a gross abuse of democracy.
There could scarcely be a more profound abuse of the democratic process than to set out to destroy a nation's demographic and cultural identity through a conscious deception of the people of that nation.
It is an act of collective national treachery.
Now we face imminently another General Election.
And now we know that in their hearts, Labour politicians hold the great mass of the public, many of them their own voters, in total contempt as racist bigots - all for wanting to live in a country whose identity they share.
Vote BNP.
Source http://www.dailymail.co.uk/debate/article-1253295/MELANIE-PHILLIPS-At-know-truth-Labour-despises-loves-Britain-values-history.html
Posted by Kevin Edwards at 22:29:00

The Labour party have absolutely betrayed the people they were there to represent...the working class. Because the working class have suffered from this mass immigration policy more than any other group.

Lets all hope the working class never again vote Labour, if they do they deserve our fullest contempt. There is no excuse now to fully understand what the Labour party has done.

We must all vote BNP at the next election. If we don't then we are all doomed !!

I sincerely hope that the majority of our people are now fully aware of the terrible fate that awaits us, should the treacherous LibLabConers and their Zionist Media Masters win.
The future of the whole European Race is at stake. Earlier generations gave their very lives to preserve us. Now it is our turn and to preserve the future of our children and grandchildren, we merely have to vote.
Vote for the British National Party.