Issues upon which the Tory and Labour parties have identical policies 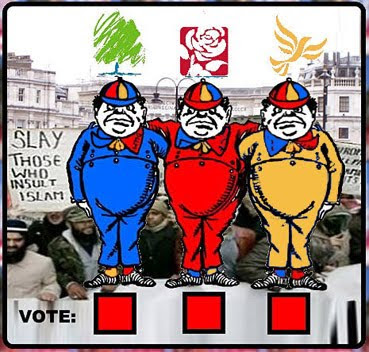 1. Immigration. The Labour Party wants a points-based system to continue; the Conservative Party wants a “skill-based” immigration policy. The end-result is identical — more immigration into Britain.
The BNP wants a halt to immigration and the billions spent on this swindle diverted to training British people with the skills necessary for them to earn a decent living in their own country.
.
2. The EU: The Labour Party wants to remain in the EU, as does the Conservative Party. This multi-billion pound swindle is dangerous for Britain’s independence and is the cause of the “Human Rights Act” and other laws which are aimed at destroying Britain’s identity and sovereignty. Both Labour and Tories endorse these laws, unlike the BNP.
3. Foreign Aid: Both Tory and Labour parties seek to increase foreign aid from the current £8 billion to £13 billion per year, even though the Treasury is bankrupt and British people must go into further debt to achieve this goal. Only the BNP seeks to end this swindle.
4. The Afghanistan war: Both Tory and Labour support the continued illegal and immoral war in Afghanistan which has killed hundreds of our soldiers and costs billions of pounds. Only the BNP seeks an end to this madness.
5. The bankster swindle: Both Tory and Labour support the bailing out of private banksters with taxpayers’ money. The BNP opposes this, and says that Britain should be bailed out, not the banskters.
6. The asylum swindle: Both Tory and Labour support the continued asylum swindle which sees scroungers from across the globe parasite off the British taxpayer.
Only the BNP supports international law which says that asylum seekers only have the right of refuge in the first safe country bordering the one they are fleeing — and no other. The halting of the asylum swindle will also ensure that British people are once again given priority in the housing queue.
.
7. The selling off of Britain’s assets: Both Labour and Tory parties support the selling off of Britain’s national assets to foreign investors who then financially exploit the British taxpayers who created those institutions in the first place. This is why electricity costs have risen by 300 percent in some areas, and why train fares have increased by 200 percent in a matter of years.
Only the BNP is dedicated to restoring the commonwealth of Britain to its rightful owners.
YOU !
Posted by Kevin Edwards at 16:30:00