The only way to clear the internet of perverts: bring back the death penalty for murder. 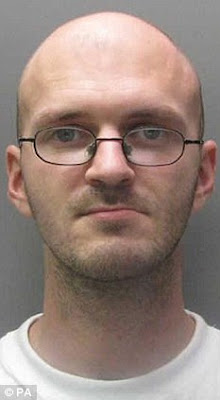 The sad and brutal truth is that the internet has ushered in a golden era for paedophiles.
.
You can warn your children all you like about the dangers of internet chat with strangers.
.
You can limit the hours they spend alone in their room, monitor their army of Facebook friends and treat every chat-room they enter as if they are playing in busy traffic.
.
And it will not make any difference.
.
Because they will still be kids, looking for validation and friendship and romance.
.
And the abusers of children will still be out there, anonymous in the virtual jungle, looking for fresh, easy meat.
Ten years ago, Ashleigh Hall would not have been murdered and dumped in a ditch by a pervert she met on Facebook.
.
Ten years ago, Ashleigh would have struggled with the torments of adolescence alone in her room – without internet access to make her feel better.
.
Ten years ago, she would never have met serial rapist Peter Chapman, (pictured above) because he would never have got near such a young and painfully vulnerable girl.
.
But the magic of that computer lets every lonely, awkward kid feel as though they have the social life of Paris Hilton.
.
For a hardened sex offender like Chapman, that computer offers everything he could possibly want to satisfy his sickest dreams, including easy access to a limitless supply of gullible children under the venal cloak of anonymity.
.
In grim reality Chapman is a bald, middle-aged weirdo who any child would run a mile from if he approached them in a park.
.
But he posted a picture of himself on Facebook looking like a boyband hunk and he was believed.
.
Five million British teenagers use Facebook. It is the modern equivalent of hanging around the chip shop, or the bus stop.
.
It is what kids do and it puts them in direct contact with men who only a generation ago would have had to keep their sick cravings in the shadows.
.
Chapman, we now learn, was in contact with almost 3,000 teenagers before alighting on poor young Ashleigh.
.
And such is the smoke and mirrors quality of the internet that even when he met Ashleigh, serial rapist Chapman was able to put her at ease by pretending to be the father of the non-existent boyband hunk.
.
And then she died. Before she ever had a life, or even her first date.
.
Dead in a ditch because of a creep she met through the wonders of modern technology.
.
Ashleigh was tragically unlucky.
.
The victim could have been any one of those 3,000 that Chapman tried to seduce online.
.
It could have been your child. It could have been mine.
.
And the problem of the abusers of children turning the internet into their happy hunting ground will not go away.
.
To my seven-year-old, the net is as unremarkable as running water or electricity. She has grown up with it. She presses a button, and expects it to be there.
.
By the time she is a teenager, social networking sites will be what the club, the disco or the dancehall were to previous generations.
.
Meeting someone on the internet is going to become as natural as getting a phone number from someone you met on Saturday night dancing under the plastic palm trees.
.
The Peter Chapmans will never go away.
.
We have to live with that. But right now they are completely unafraid.
.
We are insane if we live with that.
.
Our children need protection from the perverts and protection from themselves.
.
Chapman has got 35 years inside.
.
But any criminologist, psychologist or police officer will tell you the same thing – the likes of Chapman do not change.
.
So he will live a comfy life at the taxpayers’ expense and the same sick stuff will always be in his head.
.
He will die of old age in his bed.
.
And long out of prison by then – because these sentences are always shorter than advertised.
.
Any civilised society that truly cared about the welfare of its children would simply put Peter Chapman to sleep.
.
Humanely, painlessly to sleep – an infinitely more peaceful death than the one he inflicted on young Ashleigh, raped and murdered and dumped in a ditch like a piece of trash before she ever had her first boyfriend.
.
You want to know how to control the abusers of children who patrol the internet?
.
Bring back the death penalty for murder.
.
It is all right telling our ­children to be afraid of ­strangers.
.
But it is high time that the ­strangers learned to be afraid of the parents.
.
Source http://www.mirror.co.uk/news/top-stories/2010/03/13/the-only-way-to-clear-the-internet-of-perverts-bring-back-the-death-penalty-for-murder-115875-22107044/
.
To view the BNP's policies on Crime and Justice http://bnp.org.uk/policies/law-and-order/
Posted by Kevin Edwards at 15:26:00