DON`T BE FOOLED : THE LIB DUMS ARE LABOUR IN DISGUISE 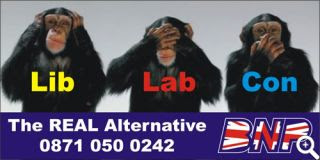 Keen to exploit his favorable position Clegg has been trying to portray himself as the voice of reason.
.
His party, he claims, is the sensible choice, untainted by either Labour's catastrophic economic mismanagement or the Tories' supposedly reactionary outlook.
.
But behind the veneer of moderation there lurks a radical Left-wing outfit which is utterly out of tune with the values of Middle Britain.
.
The instincts of Clegg's activists are very similar to Labour's: they favour the big state and uncontrolled immigration and also oppose strong defence and national independence.
.
For all Clegg's soothing words in debates it would be a disaster if the Liberal Democrats controlled the destinies of our country.
.
Puerile and implausible they are like a gang of earnest, right-on students, forever soft on crime and drugs, contemptuous of property and patriotism, hostile to wealth and enterprise.
.
OCCASIONALLY during the campaign the Leftist impulses have shone through despite the efforts of Clegg and his sidekick Vince Cable to cover them up.
.
At one stage, when warning of mass riots on Britain's streets in the event of major cuts in the public sector, Clegg sounded like that grotesque old trade union militant Arthur Scargill.
.
Similarly Cable adopted the tones of a wild-eyed Trotskyite in lashing out at "nauseating" business leaders who dared to oppose Labour's planned tax on jobs.
.
Indeed Cable is an absurdly overrated figure.
.
A former Glasgow Labour councillor he retains the interventionist, bash-the-rich, equality- obsessed philosophy of his early political days.
.
But the most revealing insight into the Liberal Democrats' philosophy can be found in the party's manifesto.
.
This document is a chilling blueprint for a Britain where the shibboleths of political correctness have triumphed.
.
If the Liberal Democrats had their way we would be without any ability to fight crime or defend ourselves
.
Our national identity would disappear, our democracy would be obliterated.
.
The people who would gain most in Clegg's brave new world would be immigrants, drug addicts, EU bureaucrats, welfare junkies, so-called "human rights" lawyers and serial criminals.
.
The big losers would be the mainstream public.
.
The manifesto calls for an amnesty for illegal migrants, of whom there may be almost one million in our midst.
.
This would be a catastrophic move because it would impose a massive new burden on our welfare system and public services.
.
Not only would the families of these illegals be entitled to claim the full range of benefits, including state housing, but the policy would turn Britain into a magnet for economic migrants.
.
It is a recipe for chaos but, not content with this lunatic measure, the Lib Dems want to take their lenient approach to immigration even further.
.
The party wants to restrict deportations of bogus asylum seekers and end the detention of children in immigration centres.
.
Ultra European fanatics, the Liberal Democrats want to see Britain turned into a province of the EU empire through greater Brussels control of public finances, borders, policing and defence.
.
Labour was rightly despised in the Eighties for its attachment to unilateral nuclear disarmament.
.
Now the Lib Dems want the same, reducing our status in the world by abolishing the Trident system.
.
Inevitably they plan to switch funds from self-defence to international aid, calling for "a global fund to help the developing world build viable welfare systems."
.
The party is also hopelessly soft on crime.
.
Instead of protecting the public they want to abolish the prison-building programme and instead rely on so-called "community sentences."
.
The manifesto claims that community terms "are better at cutting reoffending", a characteristic piece of Leftwing dishonesty
.
In fact by far the lowest re-offending rates are for those who serve the longest prison sentences.
.
Just as ill-conceived is their plan to release from jail drug addicts and the mentally ill, a grouping THESE charlatans do not deserve office.
.
They want to give the vote to 16-year-olds who are not even allowed to drive, buy alcohol or smoke because of their perceived immaturity.
.
They trumpet their desire to tackle bureaucracy but propose a plethora of new bodies, from an independent asylum agency to an animal protection commission.
.
They talk about their sense of financial responsibility then demand a deluge of new cash grabs by the State.
.
Among their plans are a local income tax, a whopping increase in capital gains tax, an airline tax and a new property tax on larger homes.
.
All their talk about democracy and liberty is a sham.
.
Remember it was the Liberal Democrats who, because of their devotion to the EU, voted in Parliament against giving the people a vote on the Lisbon Treaty.
.
The Liberal Democrats are as Left-wing as Labour.
.
A vote for Clegg is effectively a vote for Brown.
.
If the two leaders do a deal in the event of a hunt Parliament the decline of Britain can only accelerate.
.
Source http://www2.dailyexpress.co.uk/ourcomments/view/169685/Leo-McKinstry
.
Vote BNP !
Posted by Kevin Edwards at 10:13:00

Look what they have done to Swansea.

A prominent Lib Dem member once told me in Port Talbot that it is "Ok" to tell them what they want to hear to get their vote.

A bunch of Liars.

Surely, our people are now well aware that the old Parties no longer exist and these New Lib's are merely a section of the Anti British LibLabConer gang. If not, we are all going to pay an extremely high price for this ignorance.